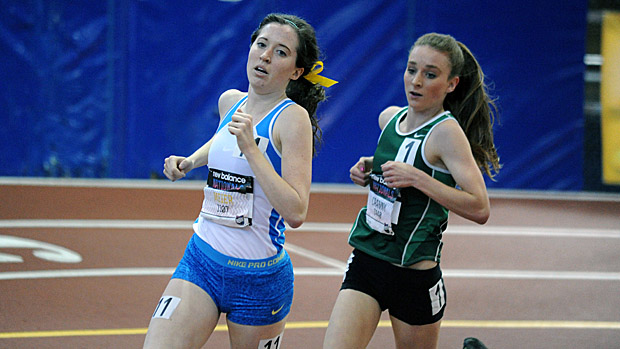 Elise Cranny stayed behind Hannah Meier for the first seven laps before bumping up the pace to finish in a negative-split 4:40.62. Photo by Don Rich, Penn Track XC.

Colorado never sends a large contingent to New Balance Nationals Indoor. But what they do send tends to be top-drawer talent. 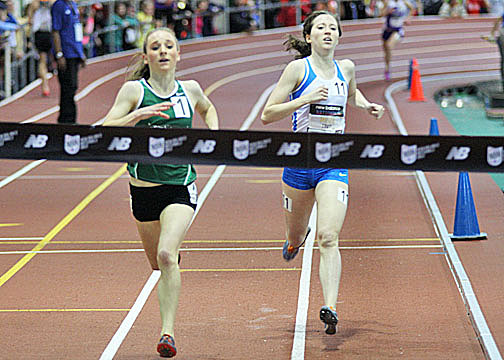 When Elise Cranny dropped a 4:58 mile at the USAFA Cadet Field House three weeks ago, a lot of folks on the national scene ignored the news. They're not ignoring anything this time. Cranny just delivered the US #5 all-time indoor girls mile and stunned heavily-favored Hannah Meier to get it done.

This weekend's NBNI meet was going along well enough, but without any gigantic exclamation points, until Sunday afternoon's girls mile.

The pace was hard from the beginning. Hannah Meier rolled through the half at about 2:21 with Cranny in close pursuit, but the fun was just beginning. Cranny's final 400 ran about 67 seconds, but it was only on the final straight that she overtook Meier for the lead and the win, saving all her remaining strength for one big push at the end of the race (photo, right, by Pat Monferrat).

Cranny closed in approximately 2:19 to smash the all-time Colorado high school girls mile mark and put herself at #5 on the all-time national list.

And, with that effort, Cranny has also found her place on the national scene. It will be a while before anyone lightly dismisses one of Cranny's performances.

To a large extent, Cranny's win righted what had been something of a listing Colorado ship at New Balance Nationals Indoor.

Dior Hall, who was expected to notch Colorado's top finish at high school indoor track and field's biggest showcase, logged the top time in the hurdle prelims, registered an 8.30 to finish second in semis, but then faltered a little in finals, going 8.71 for 7th.

Prior to Cranny's blazing mile, Colorado's best finish on the weekend was Zainab Sanni's 7.48 for fourth in the 60. Sanni was actually .01 faster and a place or two higher in semis, but it's the final that they use for awards. Nevertheless, it was a very solid weekend for the Smoky Hill senior and one that clearly demonstrated what a lot of us had already concluded--Sanni is one of the nation's very best at 60 meters.

Chyna Ries bowed out of the 60 meter dash in the semis, not quite making the cut into finals, but Ries had another solid day on Saturday at the long jump pit. Her best jump of 19-1.25 was good enough for sixth overall and only 5.5 inches out of first.