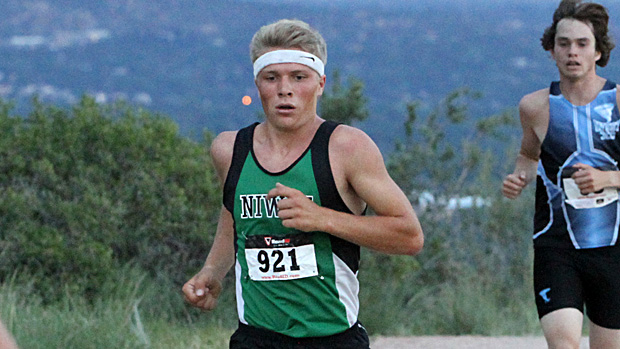 Can you believe we are already this deep into the season?

Many of this weekend's meets don't have the familiarity of Liberty Bell, of John Martin, or of any of several other prominent Colorado meets, but it's a busy weekend of cross country action nevertheless.

Busy or no, you'll probably see a good deal of spandex on Friday as high temperatures only the Front Range plunge into the 40s and 50s before recovering somewhat on Saturday. An often overlooked side benefit of spandex that could come in handy on Friday is its propensity for shedding rain. Do keep the underlayer rule in mind, however, when dressing for your meet.

And, here's a short summary what you can look forward to this weekend--and, once again, meet results for these meets will be published as soon as they become available:

It's a busier Thursday than usual, and the biggest of the Thursday meets is the Doherty Spartan Invitational. Since we've already discussed a lot about this meet in a separate article, we'll stick to the teams and the story lines here. Mountain Vista, Coronado, Palmer Ridge, Air Academy, Chaparral, Cheyenne Mountain, Pueblo West, TCA, and a few others appear to be bringing their regular varsity squads to Bear Creek Regional Park for this one. If that ends up being the case, this meet could get very competitive. It was kind of a subdued meet from a varsity perspective last year, but that's not looking to be the case this time around.

By comparison, the other three meets scheduled for today are much smaller.

The La Junta Invitational doubles as the southeast Colorado championships and has moved from Bents Old Fort to Rocky Ford due to the shutdown of non-essential government services, which would include National Park Service facilities such as the fort. Figure on South Baca, Lamar, La Junta, and Rocky Ford being there. Perhaps La Veta and/or Rye? Maybe.

And, finally, the league meet season also begins today, with the Mile High League converging on the Alexander Dawson campus in (or near) Lafayette.

On the whole, the meets get bigger on Friday, but not without exception.

Two very large meets are the Andy Myers Invitational in Greeley and the Pat Amato Classic in Northglenn. The Andy Myers meet remembers a Greeley-area distance phenomenon whose life came to and untimely end. The Pat Amato Classic recalls the highly successful coach at Northglenn High School of the 70s, 80s, and perhaps into the 90s as well. Both meets delivered scorching times in very cool temps last year. The cool temperatures will, no doubt, be back this year, but, overall, the conditions don't look quite as favorable this time around. Regardless of times, however, the competition should be very solid at both meets. We do hope to be posting start lists for at least the Andy Myers meet soon.

There was a day when the Pat Amato Classic was restricted (either by mutual agreement or by rule, I'm not certain) to 4A and 5A schools, but that day is no longer. Look for a smattering of smaller schools to be included in the Pat Amato field.

Friday's pocket-sized meet, however, does not go by a pocket-sized name. That meet would be the Paonia Jumbo Cross Country Invitational. At this moment, we're seeing Crested Butte, Hotchkiss, Delta, and Paonia on the list of entries--with a little more time to go. Pocket-sized or not, this is Paonia's first venture into hosting a cross country meet. And, if they are half as successful at hosting a meet as they are at pulling kids out of the hallways and into their cross country program, look for this meet to grow in years to come and become a truly Jumbo affair. There would appear to be a few forward thinkers in the Paonia community.

Bonus points to be earned by anyone who can tell us how the town of Paonia got its name.

Not exactly in Colorado, but exerting a gravitational pull on Durango (from 6700 feet of elevation to 1200 feet of elevation, to be precise) the Desert Twilight runs in suburban Phoenix (not that "suburban Phoenix" does much to narrow down the location), on Friday night. I'm pretty sure Durango won't be wearing spandex for this one, but they may end up confused as to just where they're sleeping. Last weekend Palo Alto, this weekend Mesa, the Durango team definitely logs the travel miles.

Montezuma-Cortez hosts their annual Ancient Trails affair in the pinon, juniper, and brush back behind the Montezuma County Fairgrounds, and under the shadow of Mesa Verde. This meet seems to have grown a little over its history and will be pushing 500 participants from four different states. I guess that's one of the perqs of being in the Four Corners area.

Centennial-San Luis hosts the San Luis Valley small schools (sadly, a dwindling group) under the morning shadow of the southern Sangre de Cristos. Whatever this group didn't settle at Del Norte's meet in South Fork on Monday gets settled here. La Veta does appear to be headed to this one, which would make an appearance at La Junta as well seem unlikely. It's not as if La Veta is in danger of running split squads any time soon.

In Aspen, several hundred runners will charge up the side of a mountain and then come careening back down again at the meet that honors the memory of Chris Severy--another Colorado distance phenom of a generation ago who died much too young. You've read the story if you read Running With the Buffaloes. I suppose, though, that Running With the Buffaloes was a much more widely read book 10 years ago than it is now. So, maybe many now aren't familiar with the story. Editorial disclaimer: before anyone goes out to make a run on used copies of Running With the Buffaloes, the book is laced with a litany of gratuitous f-bombs. Once you get past that (and I confess I have a difficult time getting past that), however, it does tell a compelling story.

There won't be any mountains to careen up and down at the Englewood Windjammer on Saturday. The main obstacles on this course would be the curbs between street and sidewalk. The Windjammer? Aye, she does have wind in her sails, mate!

Like the Mile High League, it would appear that the Northern Conference folks are aiming at getting a little extra rest in before regionals and state by moving their league meet to this weekend. I smell a trend emerging. But what I reallly want to know is how all these coaches who love to have their track meets on Fridays ended up with a league cross country meet on a Saturday. Matt Norton and Kevin Clark, do you have an answer for that one?