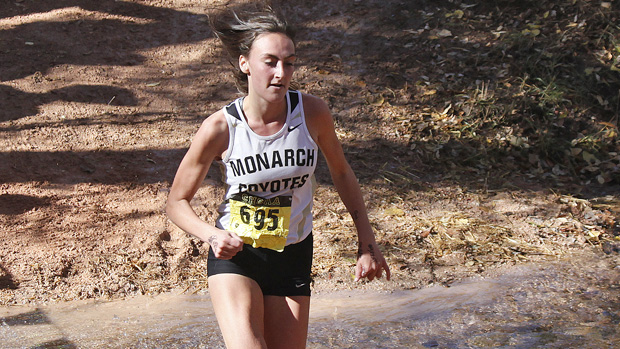 Ashley Litoff crosses the creek with barely a splash to lead the Monarch Coyotes home in a dominating team victory. Photo by Jeff McCoy.

Last season, Monarch limped home to a state title. Perhaps spent from that ordeal, they had a dismal showing at NXR-SW and ended up staying home from Nike Cross Nationals despite lofty preseason projections for that team.

This year, the play was written to a different script. The Coyotes opened up strong, issuing warning snarls at both Arapahoe and St. Vrain. Next, the Coyotes did something Coyotes are not known to do--they went into hibernation. Granted, some of that hibernation was involuntary as the choice not to participate at Liberty Bell was made for them by circumstances out of their control. But the choice not to participate in a meet the next weekend was solely their own.

Monarch dominated in a deluge at Pat Patten on September 27 and then again at Pat Amato before entering into another period of hibernation, resting their regulars completely for the league meet, and taking what had every appearance of being a carefully measured effort by their regulars through the regional qualifying round.

Did it all pay off? Well, what does 49 points to 85 for Fort Collins and 112 for Cherry Creek suggest to you?

And, it wasn't just the score. It was also a very strong presence by Monarch's top six (all finishing in the top 25) throughout the second half the race when several others who had spent too much too soon were trying to hold on by fingernails and toenails. Even without a high-octane superstar, Monarch simply dominated.

Leading the pack of Coyotes was senior Ashley Litoff, an individual who has definitely come into her own here late in her senior season. Litoff would finish in fifth, followed closely by classmates Claire Green and Kaitlyn Benner in seventh and eighth. The rout was on.

For those hoping for a reprieve from the Monarch domination next year, it's worth noting that the next two Monarch finishers, Holly Bent and Audrey Lookner, are freshmen. Karina Mann had the backside well covered in case anything went wrong with the front five.

Despite the overload on seniors in Saturday's lineup, don't look for Monarch to be going away any time soon. In addition to a very nice looking freshman class, the Coyotes have a simply stellar coaching staff in place loaded, in part, with former Colorado Buffalo standouts. Maybe it's the easy move from wearing black and gold to wearing... black and gold.

In any case, it's a great program.

Fort Collins enjoyed a strong presence early, but could not match Monarch's strides late in the race. The looks on the Lambkins faces, save one, were of an entirely different variety than the looks on the Monarch faces coming out of the creek crossing back into the finish.

Cherry Creek's hopes faded as, for a second consecutive year, Jordyn Colter's race faded on an unforgiving Bear Creek Regional Park circuit. Colter finished this year but as seventh on the Bruin team after being once again at the front of the field through early portions of the race. 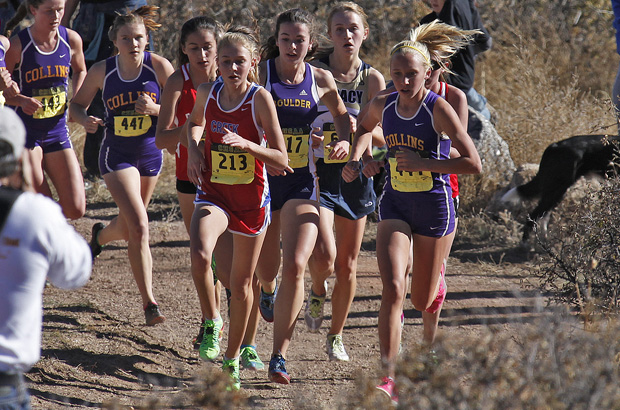 Jordyn Colter and Lauren Gregoy battle for the lead up Little Willis. Photo by Jeff McCoy.

Nobody else was within shouting distance, but Fairview managed a nice run for fourth. And, Rock Canyon closed out their CHSAA season on a strongly positive note as well, taking fith place. That's not the kind of territory many folks were projecting for Rock Canyon early in the season. A salute to Coach Dan Davies on a very well managed season is clearly in order.

Individually, after Jordyn Colter fell from the lead pace, it quickly dissolved down to a matter of how much distance Lauren Gregory could put on the field. It turned out to be a matter of considerable distance. On a day with a dearth of close finishes, Gregory's margin of victory was among the bigger ones at 22 seconds. Boulder's Erin McLaughlin, running without the support of teammates, finished second at 18:58. Grandview's Erin Norton finished third at 19:05.