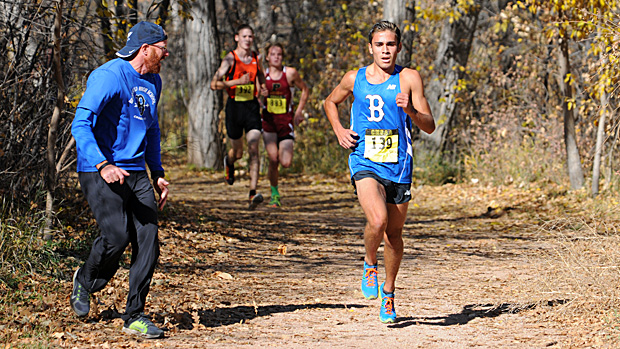 Ricardo Ocampo gets a little verbal boost from Coach Greg Weich with just over 600 meters to go in the race. Photo by Paul Jaeger.

Two years ago, the Broomfield boys let one slip out of their hands when they were heavily favored to win. This year, and coming in as a bit of a dark horse, Broomfield got it right, And that's a good thing, too, because it was Broomfield's last crack at a 4A title. The Eagles go to 5A next year.

Of the guys running on this year's championship team, only Ethan Gonzales and Cody Armstrong were running in 2011, though Jake Mitchem may have shared somewhat in the disappointment through a fraternal link. But, sour feelings have a way of sticking with a team, and with their coach. It would be the 2013 Broomfield Eagles that would replace the sour taste with the taste of sweetness.

It was a dominating win for Broomfield, so much so that, about 600 meters from the finish, Coach Greg Weich had read the order of things and was already at 90% celebration mode. And there is nothing subdued about Weich's celebrations. I had been carefully watching my own team's progress as Weich was watching his team's, and my heart sank as he launched into celebration. But, you can only sink so low when you're beaten by a team coached by a legend and which ran as flawless of a race as Broomfield ran.

Broomfield's victory was thorough in nearly every respect. Ethan Gonzales (second) and Ricardo Ocampo (seventh) went to the podium as medalists. Jake Mitchem, Jake Morris, and Daniel Alvarez-Chao each finished in the top 44 in a loaded field. Whether by thin margins or by fat, Broomfield beat second-place The Classical Academy at every scoring position. In fact, the only two teams that beat Broomfield at any scoring position were Coronado and Cheyenne Mountain, with one each.

Through three scoring places, Cheyenne Mountain--wearing black shorts and singlets in place of their usual white singlets and maroon shorts--actually held a five-point team scoring lead over Weich's Eagles, but the Indians could not seal the deal at positions four and five.

Broomfield's domination was never threatened from that point forward.

TCA's second-place finish marked a dramatic improvement over last year's eighth-place. Like Broomfield, TCA's Titans moved nicely through the second half of the race but were simply outraced by the Eagles.

Interestingly, two of the first three individual places went to individuals without teammates at the meet. For much of the second half of the race, Pueblo Centennial's Michael Duran held a commanding lead, but Summit's Liam Meirow refused to let Duran go. With a furious final kick that began at the wooded section of the course, Meirow caught and passed Duran, utlmately winning by two-and-a-half seconds over Ethan Gonzales, who also caught the younger Duran late in the race. And the string of near misses in Meirow's high school career came to a screeching halt within the confines of the Norris Penrose stadium.

Duran was followed in third by TCA's Conner Wilburn. If the race had been ten meters longer, Wilburn might have claimed third as his own.

Missing among the medalists was pre-race favorite Bailey Roth of Coronado. Roth was still among the leaders at 2.5 miles, but it was also at that point that his race started to crumble. The story of Roth's day is recounted in this article from GazettePreps.com. Roth's departure from usual form proved costly for Coronado, but even with Roth at top form, the Cougars were out of reach of Broomfield's tail feathers.