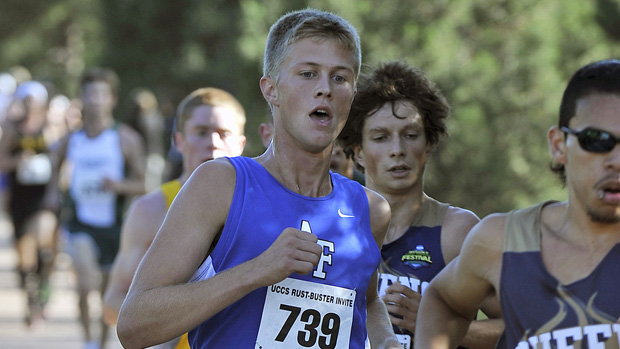 Isaiah Bragg is enjoying a solid season at the Air Force Academy and is key to the Falcons' hopes for a conference title. Photo by Ray McCoy, USAFA/DenMar Photo Services.

It's come down to this--it's conference meet weekend in NCAA Division I.

This is the first in a series of three championship meet weekends that will bring the 2013 collegiate cross country season to a close. Nearly every NCAA DI conference in the nation is holding its league championship meet this Friday or Saturday. Two weeks later, it's the regional qualifying round. Then, on November 23, it all comes to a climax in Terre Haute, Indiana, at the NCAA DI National Championships meet.

For the Mountain West Conference teams, the first round of the championship season begins on Friday at the Eisenhower Golf Course on the grounds of the United States Air Force Academy.

Last year's meet was swept, and in convincing fashion, by Joe Franklin's University of New Mexico Lobos. In fact, last year made it four consecutive years with both teams on top of the conference. Sights are set on five for this year.

New Mexico's top six men are back from last year's conference championship team, and it's no surprise that they are favored to win the conference yet again. The Lobos are ranked #9 nationally, and #3 in the Mountain region. Luke Caldwell, Pat Zacharias, and Adam Bitchell lead the pack of Lobos this year, all three with sub-24 times for 8K on the season.

Going sub-24 at nearly 7000 feet on some rolling, mostly grassy, terrain at the Eisenhower Golf Course may prove to be a tall order, however. The altitude doesn't figure to pose any special problems for the Lobos, who train at 5000 feet and up; it only figures to yield somewhat slower times than they would expect at Wisconsin or Notre Dame.

Hoping to catch the Lobos is the region's #4 ranked team, Colorado State. It's been something of a breakout season for the Rams under second-year coach Art Siemers. Colorado State edged New Mexico by a place at the Notre Dame adidas Invitational earlier this month, so it won't exactly be as if the Rams are sneaking up on the Lobos.

Slipping between Colorado State and New Mexico in the national rankings is Boise State--a team under first-year coach Corey Ihmels, the same man  who built quite a reputation for developing distance talent at Iowa State before taking over in Boise. The Broncos already own an eighth-place finish at Pre-Nationals and, like Colorado State, are itching to make things difficult for New Mexico in their bid to repeat as conference champions.

Boise State does, however, have the singular disadvantage among the contending teams of coming from low elevation. At about 2700 feet of elevation, the Broncos must come up roughly 4000 feet to run at the Air Force Academy.

Keep an eye on the homestanding Air Force Falcons as well. The Falcons hold the #5 regional ranking and have just slipped into the national rankings. Air Force finished second to New Mexico last year in Las Vegas, but get a chance to take on the Lobos on their own turf on Friday. Air Force counts only one sub-24 runner in Isaiah Bragg to counter UNM's three, but home course advantage may even this out a little.

Wyoming and Utah State, ranked at #8 and #11, respectively, in the Mountain Region harbor more remote hopes of competing for the conference title.

Among the women, New Mexico's position as defending conference champion appears a little more secure. And, that's not all that suprising, given that the Lobos have won the last five consecutive conference women's titles.

Holding six cards that clocked in at under 21:00 at the Wisconsin adidas Invitational is a hand the rest of the conference has only distant hopes of matching. And, in a region that includes Colorado and Northern Arizona, the Lobo women hold down the #1 ranking (#9 in the nation). They also finished sixth in a loaded field at Wisconsin. Charlotte Arter looks like a favorite to win the conference individual title.

Boise State is the only other nationally ranked women's team in the region, currently holding down the #25 ranking. Emma Bates joins Charlotte Arter as a regional individual favorite, but will have more to overcome in the way of altitude gain from home than Arter.