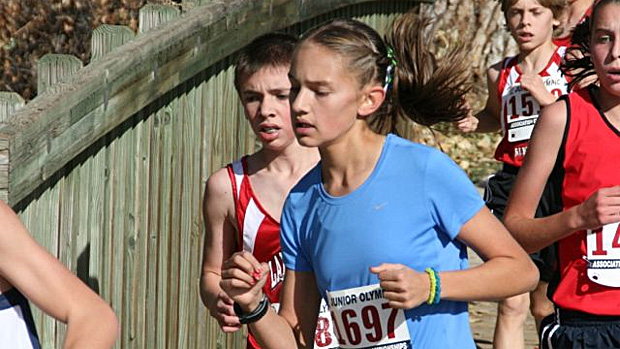 For high school cross country, the USATF-Colorado Junior Olympics meet is not the main attraction of the post season. At the middle school level, though, Junior Olympics is the big kahuna, and for several budding runners it was their day to shine.
In the 11 and 12 year old division, it was two unattached runners who stole the individual titles.
In the girls race, Riley Geldean won by a margin of over 15 seconds, finishing her 3k in a time of 11:58. Anna Shults and Tatiana Bradfield of Ric Rojas Running rounded out the top three with solid races under 12:10. For the record, Geldean, Shults, and Bradfield run for Peak to Peak Middle School in the scholastic season. This is a force that will be reaching the high school ranks before we know it.
Noah Johnson, out raced his competitors taking the boys title with a time of 11:05. For Noah, however, the end goal was not regionals later this month in El Paso, Texas or even nationals in December at San Antonio. A conflicting soccer game keeps him away from regionals this year, but he looks forward to running in the future and says that “definitely next year we are going to try and work that out.”
The Landsharks showed well in the 11 and 12 division, and especially the boys. They swept their race with their top five in the top ten. Mason Norman came in fourth followed by Noah Trautner, David Peters, Ethan Abbs and Ian Rainsburger. A sprinkling of familiar last names in that mix leaves the future full of excitement and good races for these boys.
Finding her place amid the stream of boys coming in, Brooke Calvo, also unattached, was the first girl in the 13 and 14 division. She was closely pursued by Lynzi Doke and Callin Naddy with times of 16:17 and 16:18, respectively.
Tanner Norman stole the show in the boys race with an easy win of 13:43. Griffin Hampton and Brock Dykema followed, but not for another 23 seconds. If Norman's name sounds familiar, it is because Tanner is a freshman running for TCA and was recently named to the Colorado Track XC All-Freshman boys team. Once again, though, the race was not about qualifying for regionals. According to Norman, “It was just good to come out and get a race in before regionals.” Nike Cross Regionals, that is. And you can expect to see more from him.
Despite the exceptions, the rule is that Saturday's top individual and team finishers will be moving on to compete in El Paso in two weeks.