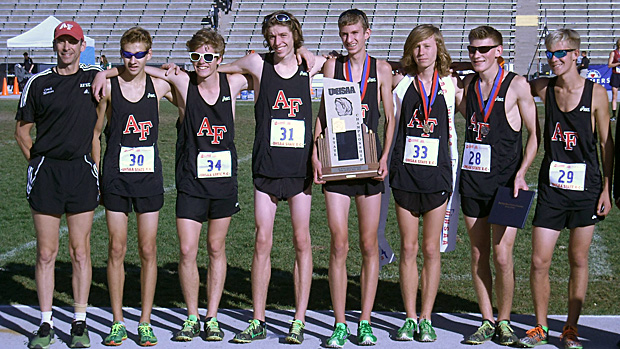 They've won a few of these before, but they keep finding ways to do it bigger. Contributed photo.

Fools rush in where angels fear to tread.  --Alexander Pope

One benefit, and about the only benefit I can think of at the moment, to not having a team projected to finish in the top ten* of either NXR-SW championship race is the ability to speak a little more freely about those races. In the paragraphs that follow, I'll give my take on Saturday's championship races and invite you to give a nod of agreement or a blast of scorn for something I missed in the comments section at the bottom of this article.

It's time to take a serious look at this thing and make some guesses at who the top finishers will be. We'll start with the boys championship race, since it will be the first of the two championship races contested on Saturday morning.

Before we get to those previews and predictions, though, let's review some of the rules of the game for NXN qualifying. The top two teams from each Nike region automatically advance to NXN on December 7. That makes for 18 teams of the 22-team field. The remaining four slots are filled by at-large bids. A committee selects these teams from the #3 and #4 finishing teams from each region. A #4 team may not be selected ahead of a #3 team, but two teams may be selected from the same region. NXR-SW has had a grand total of one male and one female at-large bid in the six-year history of Nike Cross Regionals. So, while the Southwest is a strong region as regions go, it's probably unwise to get your hopes too high for an at-large qualifier from the region.

1. American Fork - I don't know how any rational being can argue with this one. This is the 2013 version of the team that finished second at NXN in 2012, 14 points behind Arcadia. The Cavemen have been completely dominant everywhere they've gone this fall. Admittedly, they haven't left the state of Utah, but take a look at what several Utah teams did at Bob Firman and then scan through the Utah season results, most especially the Utah state meet, to see what American Fork did to everyone else in Utah. Fork has now a long history of excelling at NXR-SW. There's nothing about this road that's unfamiliar to them. Timo Mostert is clearly among the best motivators cross country coaching has known in our generation. Everything you could say about this team comes out as superlatives. Connor McMillan leads this team, but they go six or seven deep very nicely. They have at least two, and possibly three, who are legitimate threats to run sub-15 at Toka Sticks.

2. Corona del Sol - The advantage of sleeping in their own beds goes to the team from Phoenix, but CdS hasn't needed an abundance of advantages handed to them this fall. They've created their own advantages, thank you very much. Nathan Rodriguez, Ryan Normand, and Marcus Wheeler went 1-2-3 in the Arizona state meet. Corona del Sol will attempt to be the first Arizona boys team to make the trip to Portland Meadows. If you aren't liking their chances, you need to go back to the Arizona MileSplit site and catch a glimpse of exactly what they did to the competition all season long.

3. Mountain Vista - I confess this is a pick I probably wouldn't make if I wasn't from Colorado, but I have great confidence in Jonathan Dalby's ability to have his guys ready when the stakes are high. Mountain Vista had less than exceptional meets at both regionals and at the Colorado state meet, but, honestly, there wasn't much in the way of a credible threat at either. MV needs to be firing on all cylinders to finish this high at NXR-SW. Those who do the national rankings have lost confidence in Mountain Vista to live up to their preseason billing, but I will tell you this is a very poor choice of a team to go to sleep on. These guys have pretty much all been here before and know what it takes; they just need to bring a chip on their shoulder with them this time.

4. Lone Peak - LP had their doubters during the Utah season, but Clayson Shumway and company showed up at the right time and place and holding all the right cards at the Utah State meet. They lack much in the way of NXR-SW experience and so come in as something of a wild card, but least they are a wild card with some considerable momentum in their corner. Let's just hope that momentum didn't leave the camp over the month between Utah's state meet and NXR-SW.

5. Desert Vista - The national rankings say to go with Orem here, but I'm playing a hunch that another home team will show well at Toka Sticks. I like Desert Vista's pack time, and I like the fact that they don't have to deal with travel for this race. It's easy to get overshadowed by Corona del Sol in the Valley of the Sun, but Desert Vista is a very good team, and this is the first year when they've had a solid team that they've held strong through the end of the season. It's a different sort of Thunder you're hearing this fall.

Dark Horses - Orem, Tuba City, Albuquerque Academy, Broomfield, Centennial (NV), Rio Rico, Davis, and Bingham. Most of these teams are teams that showed very well at their respective state meets. Albuquerque Academy is a team that didn't show well at their state meet and very much has something to prove at Toka Sticks. Beware of teams with something to prove.

1. Davis - I'll just go on record right now that this is a very difficult pick to make. It's like picking between John Wooden and Mike Krzyzewski, between Vince Lombardi and Bill Walsh, between Joe Montana and Peyton Manning, between Babe Ruth and Hank Aaron. Some choices simply shouldn't have to be made. Davis is brutally strong, placing their top five all in the top 10 at the Utah state meet, and with a 34-second pack time, no less. Aubrey Argyle leads, but the rest follow in close order. This is a great, great team. But so is the team in number two.

2. Monarch - Monarch has no superstars. They are simply very effective through the front seven. Monarch had all of their top five in the top 24 at the Colorado state meet with a 59-second pack time. And that on a course that is unkind to packs. Ashley Litoff emerged at the front of this team late in the season, but there are leaders aplenty on this roster. They've come into NXR-SW running on fumes the last couple of years, but they went through the season with a different plan this year. It worked very well at state...

3. Desert Vista - Through two postions, DV is at least the equal of Davis and Monarch. Danielle and Baylee Jones have had a spectacular season. But DV will need sensational showings at 3, 4, and 5 to keep pace with either Davis or Monarch. Desert Vista was clearly the best team in Arizona this fall. And, though Arizona seems to be taking steps forward in the world of girls cross country, DV has not had to deal with the kind of competition this fall that the Utah and Colorado schools have. This could very much be a coming-of-age kind of meet for Desert Vista.

4. Fort Collins - I pick this team at fourth knowing full well that the prediction will go straight to the bulletin board. Chris Suppes never met a motivational opportunity he didn't like. Fort Collins has never finished worse than second at this meet and has qualified for NXN every year that regional qualifying has been in place. For that to happen this year, however, somebody in purple (or whatever color they come to the line dressed in on Saturday) is going to have to take over the role Erin Hooker filled so well for four years in getting this team to combust at just the right moment. Lauren Gregory matches what Erin Hooker did on the course, but her boy scout fire-starting skills are as yet untested. That said, never, never, never underestimate Fort Collins.

5. Ogden - If there is anyone in this race who is a threat to Elise Cranny, that would be Sarah Feeny, but Ogden may be looking to fry their fish in the team race. Ogden's been down this road a few times previously. These should be older and wiser Tigers, but also hungry Tigers. If they come to the line in full battle mode, they can contend for an at-large position in a region that can make an extremely good case for an at-large berth (that would be, at least, the take of this writer).

Key to the teams:

*-I will, however, remind a certain group of boys that not being projected to finish in the top ten is not quite the same as not finishing in the top ten.