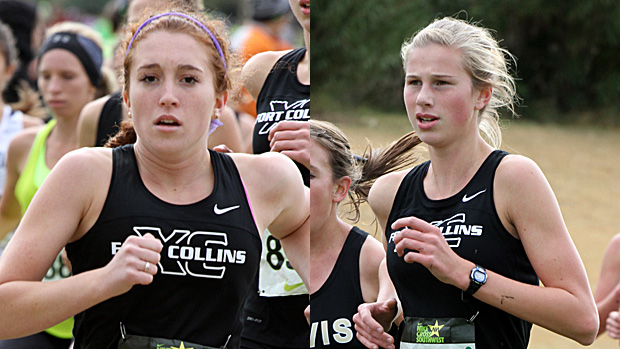 Seniors and NXN veterans Audrey Oweimrin and Kari Van Zyl helped to key the biggest upset of the day at NXR-SW. Photos by Alan Versaw.

Black isn't the usual NXR-SW color for Fort Collins, but there was some black magic going on today.

1. Momentum, no matter how strong, eventually wears down.

3. They didn't even win their own state meet four weeks ago.

There were about two reasons that Fort Collins should have won:

1. These girls know how to win when a trip to Nike Cross Nationals is on the line.

2. You can go broke in a hurry betting against Chris Suppes.

And those two reasons trump an entire list of reasons to the contrary. Most of the Southwest understands that by now, but we get annual reminders nevertheless.

With a late-race surge that picked off several runners from both Davis and Monarch, Fort Collins accomplished what seemed impossible only a few days before. The Lambkins not only qualified for their seventh consecutive December trip to Portland, but they beat heavily favored Davis and Monarch in the process.

It's not as if either Monarch or Davis had an especially bad race. Both teams scored less less 90 points in a stacked field of 25 of the best teams from across a five-state region. Monarch and Davis had as much at stake when they toed the starting line as Fort Collins did. Fort Collins simply found the way to make the most of their opportunity, beating Davis by a single point, and Monarch by 13.

Lauren Gregory did roughly what was expected of her, finishing sixth in 17:49 on a sloppy course. It was the effort from the next four that made the difference between going home and hoping for seven long days (the fate now assigned to Monarch) and on-the-spot celebration. Devyn Miller took 19th in 18:35. Veteran Audrey Oweimrin snared 26th with an 18:44. Heather Holt crossed next in 31st at 18:50. And Kari Van Zyl scored what could be argued as the most important finish of all--taking 41st a mere .01 of a second ahead of Davis's Hannah Albrechtsen.

And therein lies your one point margin of victory.

Led by Aubrey Argyle and Taylor Cox, Davis also had four runners under 19-flat on a day when breaking 19 was no simple task. On most days, and against most teams, Davis's effort was more than enough to win. But NXR-SW Saturday is no ordinary day; and Fort Collins is no ordinary team.

There was no margin of error for any of these three teams.

Individually, the contest was not nearly as intriguing. Elise Cranny made it a point to take the mystery out of the eventual outcome. After trading strides for most of the first half-mile with Herriman's Lucy Biles, Ogden's Sarah Feeny, and Air Academy's Katie Rainsberger, Cranny simply pulled away from her pursuers and would not be heard from again unti the finish line. Biles would eventually finish second and Rainsberger third, both earning trips to Portland in two weeks for their efforts 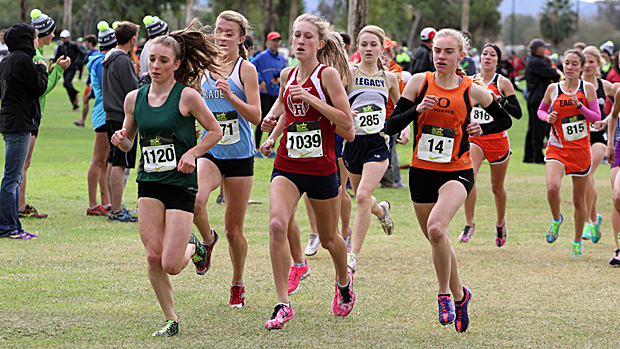 Elise Cranny ran for a while with some tough company but eventually left them all in her wake. Photo by Alan Versaw.