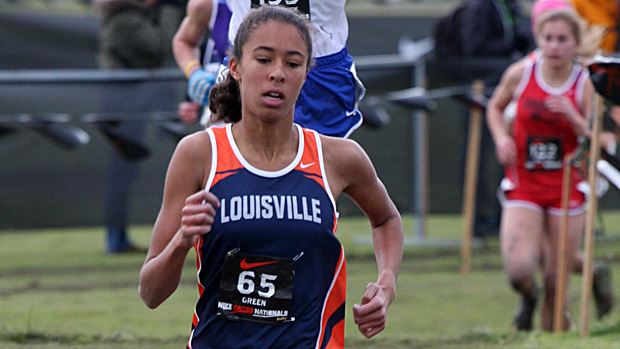 Claire Green is one of only two members of the current Monarch team who have experienced Nike Cross Nationals. Colorado Track XC file photo.

Today is the day that Colorado's teams and individuals depart Denver International Airport for Portland. You'd think it's a good time to be getting away from Colorado, but the weather is only marginally better in Portland. This one figures to be one of the coldest, if not the coldest, running of Nike Cross Nationals in the meet's ten-year history.

One of the advantages of the current cold snap, however, is that the athletes could be running on a frozen track on Saturday morning. Where speed is concerned, a frozen track beats slogging through mud. It also means swapping out the half-inch rapiers most runners use on this course for much shorter spikes. If the course stays frozen Saturday morning, course records are very definitely in jeopardy. Whether that's a net gain, a net loss, or a break even factor for Colorado's entries relative to the field is a much more difficult question to answer.

Colorado will be represented Saturday by two teams and by six individuals. The teams are the Fort Collins and Monarch girls, both of whom have been there before. The individuals representing Colorado will be Zach Alhamra, Bailey Roth, Cerake Geberkidane, Elise Cranny, Erin Norton, and Katie Rainsberger.

For Fort Collins, it is the seventh consecutive trip for the girls. The highest previous finish came in 2009 with a third. Fort Collins has never finished outside of the top eight in that seven-year span. Lauren Gregory looks to take over the leadership role of Erin Hooker, who helped lead Fort Collins to the high-water mark finish of third.

For Monarch, it is a long-awaited return trip for the 2010 team that finished 15th. Only Claire Green and Kaitlyn Benner from the current team remain from the 2010 squad. Monarch comes onto the NXN 2013 scene is the second-ever at-large team from the Southwest region.

Of special note on the Fort Collins team is the fact that Audrey Oweimrin looks to join a select list of four-time Nike Cross Nationals participants the instant the gun goes off on Saturday. Oweimrin will join former teammate Erin Hooker as the only Colorado names on that list.

The honor of qualifying as an individual for Nike Cross Nationals is difficult to overstate. Even so, for Colorado's entries, it's about much more than just being there. Pre-race speculation has focused heavily on Cerake Geberkidane and Elise Cranny as individual title contenders. Both get the biggest opportunities yet on the national stage in Saturday morning's event. Both are in for the race of their young lives.

For Bailey Roth, NXN represents a golden opportunity to write a far more satisfying ending to his story than the CHSAA-sanctioned season left him with. Katie Rainsberger, though seemingly running in the shadow of Cranny all season, is a legitimate contender for a top-ten finish this year. Rainsberger finished 13th last fall. Zach Alhamra continues a tradition of Pine Creek appearances at NXN and will be looking to add an exclamation point to the end of his season as well. Erin Norton is the first-ever representative of Grandview High School and will aim at making a memorable first impression in her final high school cross country race.

Note: Erin Norton moved up into an NXN individual slot when Utah's Lucy Biles opted to run at Foot Locker West this weekend. Zach Alhamra moved up to take the place of Conner Mantz, who made the same decision as Biles. Foot Locker regionals have definitely not died out for Utah runners--a whopping 811 Beehivers are listed as registered for Foot Locker West.