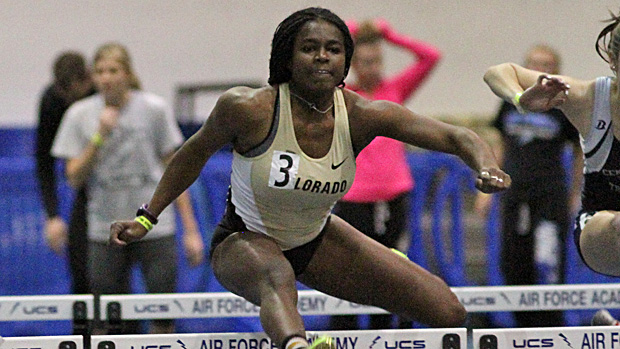 Abrianna Torres is one of two University of Colorado pentathletes who would make the cut for nationals if that cut were taking place today. Photo by Alan Versaw.

Qualifying for DI nationals is a much more straight-forward process than qualifying for DII nationals. At least this year it is. DI has taken a page out of the CHSAA playbook and gone to rankings for qualification. The top 16 in each event, after scratches, make the trip to Albuquerque in the middle of March to settle it all at 5000 feet in the Albuquerque Convention Center. The Albuquerque elevation already has, and will continue to, generate a little consternation.

In any case, if we were to make the cuts and hold the meet tomorrow, Colorado State would be fresh out of luck. The Rams haven't yet competed on the indoor circuit, making it extremely difficult for them to have any qualifiers. So, we'll move on to other schools...

Colorado - The Buffs have a solid number of top 16s on the qualifying lists, just not where you'd necessarily expect them to be. Mark Jones currently sits tied at #1 on the high jump list, and if you were at the Air Force Holiday Open on Friday night you understand why. Alex Kizirian easily makes the weight throw cut at #3. And Brittany Lewis sneaks into the long jump at #13. Lewis and Abrianna Torres both currently make the pentathlon cut at #4 and #7, respectively. Jason DeWitt makes the heptathlon cut at #8, barely missing the high jump cut.

So, that's a good start for the Buffaloes. Let's head north and east to Greeley to see what Bears have come out of hibernation a tad early.

If nationals were run tomorrow, UNC would send Isaiah Grady in the 60 meters (even after the altitude adjustment), Trevor Evanson (#10, high jump), Rachel Hinker (#9, long jump), and Alisha Allen (#10, pentathlon). Right offhand, I'd have to say there should be some folks in Greeley feeling very good about that kind of early showing.

Colorado's lone other DI track and field institution is the Air Force Academy. And, for a small meet on a Friday night before finals, the cadets posted some very nice showings. To wit, Rachel Herald's 5-10.5 high jump currently has her at #2 on the board. Joey Uhle and Dylan Bell hold a commanding 1-2, for the time being, in the pole vault, while Cort Rogers slips in as the beneficiary of a massive tie at #15. Blue Kearney makes it in the long jump at #14. Danielle Tabb closes out the list with a #15 ranking in the shot put.

Combing the rankings list for names of other Colorado high school graduates, I found Kita Alvares sitting in #9 in the 400, Scott Carter at #9 in the triple jump, and Mason Finley at #2 in the shot put.

The big caveat that must be stamped on all of this, of course, is that a very large number of the best athletes in the NCAA DI ranks have not yet laced up a spike or hoisted an implement in competition. There will be a great deal of movement on these lists in January. But, for now, it's been a very good December for Colorado's indoor athletes.