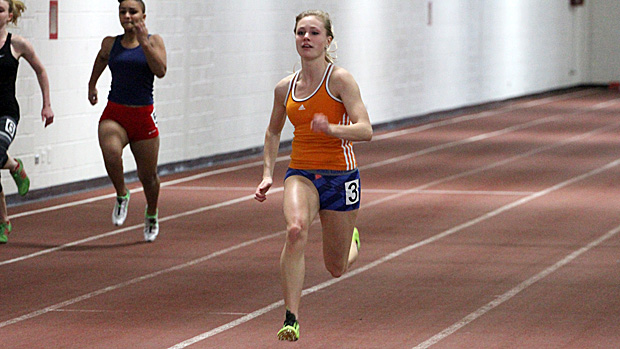 I started doing Colorado Track XC in January of 2008. I have very little data from that indoor season, but let's take a look at the girls top ten 60 meter dash times for the indoor seasons from 2009 forward. This would include results from all indoor Colorado meets--all USATF-Colorado meets at Balch Field House, all high school meets at the Cadet Field House and Steinhauer Field House, plus any collegiate meets that Colorado high schoolers happened to slip into.

1. Ally Watt, 7.43
2. Chyna Ries, 7.46
3. Shayna Yon, 7.51
4. Alexei Cox, 7.68
5. Alexandria Groce, 7.68
6. Alexis Groce, 7.75
7. Audra Koopman, 7.76
8. Alivia Ayres-Perry, 7.79
9. Daisha Stanley, 7.88
10. Tashay Brown 7.89
13 total under 8 flat
records for 124 athletes
Clearly, a few things are beyond dispute. What was once rare (a sub-8 60) is still uncommon, but not nearly as rare as it once was. We are also seeing a fairly steady uptick in the number of participants. At some level, that can help to generate the increased numbers of sub-8s, but you could just as well argue the other way around--because we are seeing more sub-8s, interest in indoor track and field, and the girls 60 in particular, is a first beneficiary.
From this distance, it's difficult to pin down a cause-and-effect kind of relationship between numbers of participants and numbers of sub-8s. But, we certainly haven't eliminated all of the factors to consider once we've introduced those two factors.
One thing we can say, however, is that not only does the count of sub-8 times seem to be growing, but top times seem to be dropping as well. Top times do not automatically drop just because you have more athletes in the pool. The gradual improvement a times within the top 10 strongly suggests that more is at play here than just a larger pool of athletes to draw from.
Another often-cited factor for improving performane is that of athlete awareness. What sorts of things are athletes better aware of than they were five years ago? They are better aware of off-season competition opportunities and coaching. Awareness of what it takes to get to state. Awareness of what it takes to win state. Awareness of the benefits of weight room work and better nutrition (though I remain unconvinced that many teens are especially tuned in to matters of nutrition). Awareness that a sub-8 60 really is possible. The list goes on.
The last item on the list above probably merits some unpacking. It may well be the most important item on the list. If someone thinks sub-8 is way out there and beyond hope, she doesn't aim for it. What you don't aim for, you don't reach. Once sub-8 becomes viewed as attainable, the number of people hoping--and training--increases in a big way. It's fair to say we've reached the point where many naturally gifted female sprinters see sub-8 as within their own realm of possibility. Consequently, a lot of them are going through the bother it takes to make it happen.
It's interesting to ask if we have bumped into something of a ceiling here in 2014. With only two more indoor meets left in Colorado (unless someone slips into a later collegiate meet), the count of athletes is essentially equal to 2013. The to-date count of sub-8s is slightly below that for 2013, without a lot of hope remaining that this year's count will exceed that of 2013. It could happen, but, given that the two remaining meets are on the same day, nobody is likely to have two more opportunities.
In all likelihood, we'll need another year or two or three to answer that ceiling question.
And, the answer to that question will not come without another confounding variable. Rumors are afoot that both Adams State and Western State will be hosting meets at their new indoor facility starting next year. That will further augment the pool of girls running indoor 60s, and--since both venues are higher elevation than any of the currently available options--maybe a little thinner air helps to push a few more girls under the 8-flat barrier.
Time will tell!
Tweets by ColoradoTrackXC