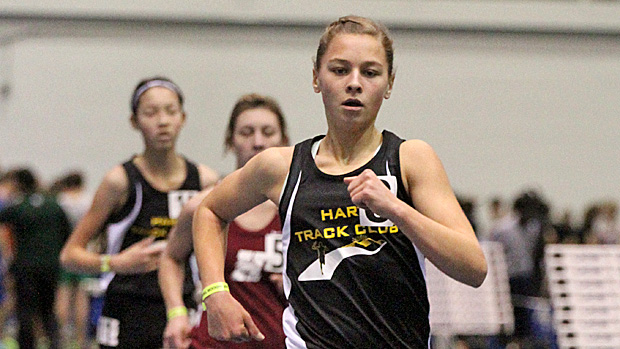 The Colorado indoor season was about due for something of a reprieve, and it seems to have found that reprieve this last weekend.

With the USATF-Colorado State Championships and the Air Force High School Indoor Open coming up the next two weekends, it appears there were a number of athletes laying low on Saturday, or just simply taking the weekend off.

Which, of course, is different than saying there were no highlights to be had from the meet.

Among the boys, there was Jai'Shawn Thompson matching his season best mark of 6.90 in the 60, easily winning the final over Kevin McClanahan in second. Thompson's win over Aaron Ragin in the 200 wasn't nearly as easy. Ragin also won the 400 by about two seconds. Make sure Ragin is on your watch list for 200 and 400 meters this spring. Joseph Saling dealt Ryan Younggreen his first loss in the 60 meter hurdles this winter, but the difference at 8.41 for both was indistinguishable to the human eye.

Girls highlights included another 60 meter hurdle win for Dior Hall at 8.46. Shayna Yon took wins in the 60 and long jump, extending her season best mark in the LJ to 18-10 in the process. Maya Evans showed up at 18-4.5 in second, sending a warning over the bow of the Good Ship Long Jump. I'm not sure which high school Evans will be competing for this spring, but somebody is getting a game-changing freshman. Haley Showalter beat Nina Thomas in the shot put on a better second throw. And Beth DeLaurell schooled the field in the 1500 with a time of 5:15, beating Lily Martin by three seconds for the win (I believe this to be the Lily Martin of Estes Park).

As might be expected the 200 and 400 meter times showed the effects trying really hard to hang on in the turns and were a bit off what had been posted last week at the Air Force Academy. That seemed to show up more in the girls races than the boys this weekend, but it was there for both nevertheless.

Look for a much larger crowd of competitors this weekend.