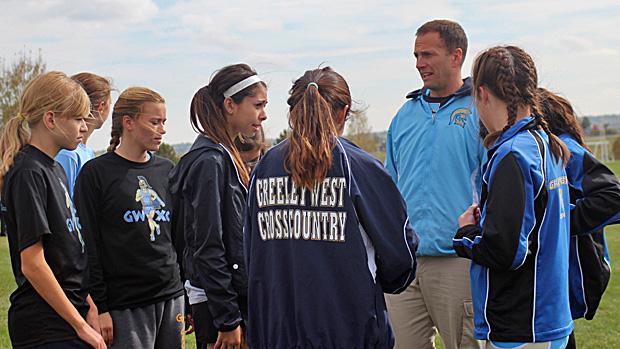 The pre-race strategy session is one of the fun parts of coaching, but probably not even close to the reason most of us coach. Contributed photo.

People often ask me "Why do you coach high school kids?" My instant response is that it is for the money, which always gets a good laugh. Instinctively, I know I am where I am supposed to be, in a cosmic sort of way, but I had never tried to put into words exactly "why" I do coach high school kids.

So I looked deep inside my soul to really, thoroughly answer that question. I quickly discovered that the answer couldn't be confined to a quippy one-liner, or even a short couple of sentences. Instead, I felt that the only way to truly answer this pesky question was through the telling of a story.

The story is of a girl. She could be any one of a thousand girls in the US every year. I coached this particular girl some years ago. She joined the track team with the aim of being an 800m runner. She was a hard worker and a fierce competitor. She was modestly talented and she had set a goal to break 3:00 by season's end. In her first race, she posted a 3:21. This just served to embolden her towards her goal. She worked harder, and became a student of the sport. As the weeks passed, her times dropped with every performance. 3:18, then a 3:14. Ultimately she had worked her way all the way down to a 3:02, with but one race to go.

Dawn broke on meet day, and the wind was blowing a little, and the forecast was for hot temperatures. She arrived supremely focused, but her outward confidence seemed somewhat hollow. This was it. One race. All or nothing. The gun sounded and off she went. Her form had improved dramatically from all of her diligent training. Her feet were landing perfectly beneath her and then snapping off the ground behind her almost instantly. She seemed relaxed and completely absorbed in the task at hand.

The halfway mark approached and she crosses it in 90 seconds flat. Perfect! Now though, the race gets more difficult with every passing meter. The 800m, being somewhat anaerobic, creates a by-product disaster with around 200m to go and she was no exception to this rule.

Her form begins to deteriorate ever so slowly. Her cadence slows just a bit, while her stride length stretches out maybe an inch or so, in order to compensate. Fifty more meters and her back begins to arch. Her head, so strong and perfectly positioned just thirty seconds ago was know pointing ever more skyward, and tilting just a little to the left. Then came the final stretch. Every fiber of her being is doing its best to just keep running. Maintain form. "Cadence" I scream over and over from the infield. The last ten meters are nearly disastrous as she leans too much and nearly falls, but catches herself just as she crosses the line.

I am standing just past the finish line, in the infield, watching her as she slows to a stop, gets her number recorded, and turns towards me. Her face tells the story. Her eyes are watering. Her lower lip quivers. She looks lost, ashamed, and scared all at once. She knows she missed it.

She knows that last hundred meters wasn't good enough. Her goal. The goal she was so focused on and worked so hard to achieve was not realized. I remain motionless and continue to just watch her. How would she handle this disappointment? How would this help define her character? As she approaches, the watering eyes have begun to escape onto her cheeks. Her knees are wobbly, both from the exhaustion of the race and the emotion of the moment.

When she arrives to where I stand, she is doing her best to hold what is left of her fragile emotions together. Without speaking, she motions to the watch on my wrist. I hold it up to her eyes and she reads it. 2:58! "You did it." I calmly say.

She does not scream. There is no fist pumping or high fives. Instead, she half gasps at the sight of the watch, drops to her knees, and she weeps. She weeps openly and does not care who sees. Teammates and opponents alike pat her on the back and congratulate her, and still she kneels, and weeps. I let her cry. I let her cry for as long as she needs or wants to. She earned that right.

Eventually, she stops. The next event is well underway on the track by then. She struggles to her feet, gathers herself, and she looks me straight in the eyes. With absolutely, genuine gratitude she simply says "Thank you".

It 's everything I can do to choke down the miserable frog that had suddenly found its way into my throat, and say, "Young lady, you are most welcome."

That is why I coach high school kids.