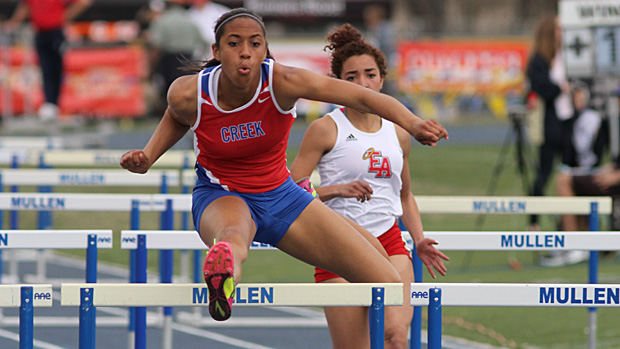 Ashley Miller made the 100 hurdles look simple in a wind-legal 13.87. Photo by Alan Versaw.

This morning, I posted an article touching on some--but by no means all--of the highlights from the 2014 Mullen Adidas Runners Roost meet. Sometimes, you just need to get something up because of the magnitude of what happened.

With a little more time for reflection, though, it's time to post some additional thoughts about this year's version of the Mullen Runners Roost. Although it was not the biggest meet in the state this weekend--not even close--it did turn up an exceptional number of top-tier performances. What follows is a quick once-over on many of the most important results coming out of the meet.

We saw a kind of versatility from Dior Hall that we've never before seen. Hall wasn't seen running the 100 hurdles, but she did acquit herself will in the 100 and 200, losing narrow decisions to Cherokee Trail's Shayna Yon in both events. This, combined with the SMR8 performance on Friday night where Hall ran an estimated 400 split of 53.5, raises a few more questions that it answers about where we'll see Hall in the state meet. The 100 hurdles is surely a given, but the rest of her state meet seems to have a few more possibilities than before.

And, don't rule out a state title run for the Patriots. Clearly, GW can create some havoc with relays, and Darby Gilfillan demonstrated with clarity that she's among 5A's best at 1600 meters.

Kamryn Hart offered up another thunderclap at 400 meters, where she easily disposed of threats from Heather Harrower and Damajahnee Birch. Hart's 55.52 looks like the real deal at this point.

Possibly overlooked in the wake of Elise Cranny's piece of second-lap domination in the 800 is the fact that Jordyn Colter and Claire Green both ran 2:11.xx. There are some 800 meter showdowns in our near future.

If distance event times at Mullen, and elsewhere up and down the Front Range, seemed a little off--and especially so at 3200 meters--take a check of the barometric pressure readings from Saturday. There wasn't a lot of oxygen to be inhaled.

Cherry Creek's Ashley Miller had a big day, but there was nothing bigger about it than the 13.87 (-0.8) she whipped out over the 100 hurdles. For the record, what's bad for distance is good for sprints and short hurdles. Diminished air pressure means less oxygen to breathe for distance runners, but thinner air to push through for the really fast types. There's a reason the NCAA also adjusts sprint and hurdle times at altitude, and Saturday's barometric pressure in Denver mimicked normal conditions at considerably higher altitude.

Stephanie Bess went 17-7 to win the long jump, but she will need all of that and more to keep her head above the rising tide among 5A girls long jumpers. Maya Ries won the triple jump at 36-6 without an assisting wind. Hannah Carr swept the shot put and discus titles.

If you were paying attention last weekend when Mountain View got the best of Palmer Ridge down at Pueblo County (officially, Palmer Ridge got the DQ--and it had nothing to do with a trip to Dairy Queen--but we have our spies who help keep us informed of these things) in the 4x400 last Saturday. There was a little bit of a role reversal at the tail end of Saturday's meet. Palmer Ridge ran 3:22.13 to Mountain View's 3:26.71. Notice has now been served both directions. It only gets better from here.

Palmer Ridge fired another impressive tracer bullet with their 1:28.83 4x200 earlier in the day, as well.

It is considered folly by most to front run the 800, but most people aren't straight-up faster than the entire field. William Mayhew demonstrated that he is, winning with a time of 1:53.73. Try to imagine Daniel Book looking heavy footed running a 1:54.24. Is anyone else looking forward to Mayhew v. Petrie?

If Broomfield cross country didn't make a believer of you this past fall, then perhaps you were impervious to a very smartly run 9:58.42 by Daniel Alvarez-Chao in the 3200 as well. And tuck away the note above about the barometric pressure conditions when you file away this time. Another day, another place and Alvarez-Chao runs a much better time than 9:58.

Colt Sessions leaves no room for doubt at 7-0. Photo by Alan Versaw.

Tesfai Holt of Smoky Hill is one of the principals in what figures to be a very good pole vault competition at the Mullen Runners Roost. Colorado Track XC file photo.