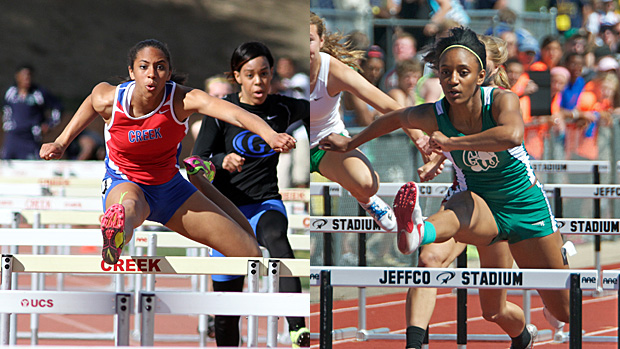 Everyone would come up with a different version of 10 questions for the state meet to answer, but these are my top ten:

I'm sure the other three schools on that list are as invested in the outcome of this weekend as we are. But, I'm just as sure there are schools out there sold out to the idea of not letting it happen. And the result will be some outstanding competition.

9. What state meet and all-classification records will fall this weekend?

Some records are clearly out of reach, others are very long reaches, and still others are ripe for the picking. We saw a bumper crop of broken records last year and probably won't get as many this year, but some will fall. It's just a matter of which ones and when. As a category of event, the relay records seem to me most vulnerable heading into this weekend's action.

8. How will the new video board at Jeffco Stadium change the fan experience?

I admit I don't have a clear idea yet of what the impact will be, but I'm anxious to find out. One impact might be that a lot more people stay put in their seats. I won't be one of those people, however. I've never been able to watch a track meet sitting down. And, I'm not anxious to learn.

7. Who wins between Tarynn Sieg, Courtney Clark, and Hannah Carr in the 3A girls shot?

Not many years ago, it was rare to see a 3A girl go over 40 feet in the shot put. Entire seasons went by without it happening once. Yet, Sieg, Clark, and Carr are over 40 almost every week now, or so it seems. There are lots of great throws happening in the girls ranks this season, but the actual competition is nowhere keener than it is among 3A girls.

McClanahan has had his way with the 100, 200, and 400 this spring--at least where 4A is concerned. Can he pull off the sprint triple this weekend?

Just because the 32 is the first day of state and the 16 the last day of state, the 32 tends to be favored. But, the oxygen density conditions look a lot better on Thursday than on Saturday as well. That said, nobody in any classification scratched the 1600. They may be tired athletes when it gets around to the 1600s on Saturday, but they will be invested athletes.

Think of it as a bonus--you get two questions in one here.

Two great showdowns loom in the largest classifications for the girls team titles. At 5A, Pine Creek has to be a little chafed at constantly playing second fiddle to Fort Collins. The chances of reversing that order aren't likely to be better than they are this weekend for a long time. Niwot would like to repeat as 4A girls champions, but the second state title is always harder than the first. We could write a whole article on the psychology of that, but it rings true with the experience of many who have tried and come up short. And, it doesn't help that Thompson Valley is a team that doesn't leave you a lot of margin to play with--even on your best day.

3. Can Blake Yount do it again?

Yount broke the all-classification 800 meter record last weekend. Can he repeat the feat on the big stage? Will anyone have the temerity to take an early lead on Yount?

2. Can Elise Cranny take down the all-classification 800 meter record on Friday?

Cranny ran a little over 2:04 earlier in the season in California. All the tables say that is faster than 2:07.53 at 5300 feet of altitude. But, it doesn't count until you actually do it. There will be a lot of sidewards glances at the clock during this race. Let's hope the announcer is on his game for this one!

If you can't get excited about a showdown between two hurdlers ranked in the top seven nationally (and three of the other five marks on the list are wind aided), you may not have a pulse. That may be something you should get checked out. Otherwise, get on your feet for this one come Saturday morning. All this, of course, assumes that they both get to, and race in, finals on Saturday morning.