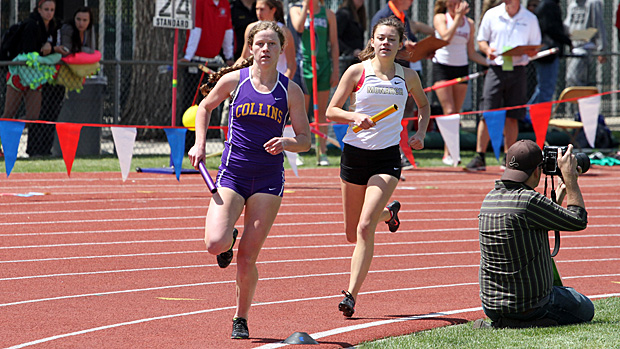 Just a quick series of notes and thoughts on what transpired in the 4A and 5A divisions of today's first day of the 2014 Colorado state meet...

Fort Collins, and especially the Fort Collins girls, made the most of their day. Lauren Gregory won the 3200 and Josephine Natrasevschi won the discus, as expected. What wasn't as expected was the little piece of domination that Fort Collins exercised over the 4x800. Years upon multiplied years of frustration for the Lambkin girls ended with a 9:06.06. Audra Koopman earned a second in the long jump. That left Fort Collilns with a very impressive total of 38 points at the end of the first day.

First day highlights for the Collins boys included a second for Luke Sheesley in the 3200 and a ninth for Langston Stuckey in the long jump.

Cherokee Trail began their boys title defense with a nice first day. Brandon Singleton advanced with the top prelims time in both the 200 and 400. Mar'Keith Bailey also advanced his 400. The Cougar 4x200 advanced cleanly, and points were earned by a pair of fourths by David Thornton in the high jump and Harley Korte in the pole vault.

Fountain-Fort Carson, however, lost no ground to Cherokee Trail on day one. The Trojans advanced their 4x200 with the top seed, advanced the top two seeds in the 100 and Jaysean Skrine in the 200, scored a third in the 4x800, got a sixth from Duane McClurkliln in the high jump, and another sixth from Charles Tigner in the long jump.

Fossil Ridge tops the 5A boys day one point total with 24 points, due largely to a first in the high jump and a third in the long jump for Tyler Russell.

At the 4A level, Thompson Valley and Longmont share a very close day one lead over Mountain View and Eagle Valley. It was mostly good news, but a strong 4x800 for Mountain View where Riley Cooney held off a last lap challenge from Katie Rainsberger cost TV a few points that could turn out to be critical later on. Niwot posted no score in the day one results. Think of this day as an overall positive for Mountain View and Thompson Valley in their respective bids to unseat Niwot as the 4A state champions.

Niwot did advance Kela Fetters in the 100 hurdles and the 4x200 relay, but failed to advance any entries in the 200 or 400 and missed scoring in the triple jump. But, we do start seeing Elise Cranny tomorrow.

In 4A boys, Eagle Valley jumped out to the first day lead with 15 points from a solid 4x800 and a third in the triple jump from Riley Rowles-Birdsong. Close on the Red Devils' heels was Broomfield with a win in the 4x800 and some bonus points from Robert Carlson in the triple jump. It was a very good first day for the Eagles, who also advanced Jordan Xiong in the 100 and 200, plus a 4x200 relay team.