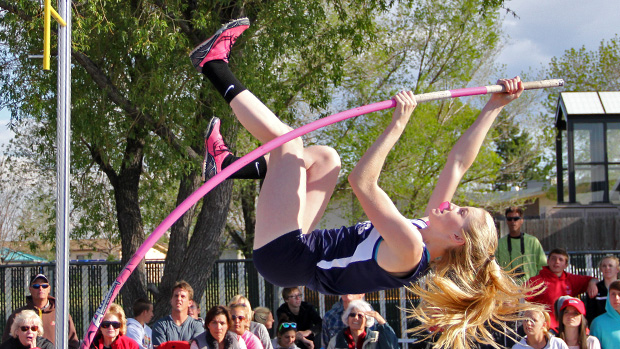 Anyone invested in the track scene in Colorado knocked on wood, crossed their fingers, and recited some lucky numbers in hopes of warding off the rain.
This is doubly true for pole-vaulters as they are the trackers most impacted by rain.
Thankfully the weather held out through three divisions of vault before a sprinkling arrived midway through the 1A girls running of the event, but more on that later.
The heavy hitters of boys 5A took to the runway first. The field whittled down to three at 15-0.  Brad Mattison of Doherty and Nolan Ellis of Chaparral each spent three tries at 15-00 when Andrew Barlow faced the crossbar for his third attempt.
Barlow made sure the competition would not be determined by misses and cleared the height.
Freed from the pressure of competition, Barlow shot over 16-0 in his first attempt. Barlow explained the strange sequence of attempts with the rush of victory.
“Jumping with other jumpers, sometimes there’s just a lot of pressure, and it’s hard to make a bar. But jumping alone, especially after winning state, I just had so much adrenaline and I decided to make it up there.”
He closed the competition with three unsuccessful attempts at 16-5
Both Barlow and Mattison are juniors. Look for more great things to come.
The 5A ladies followed their male counterparts. The field featured the showdown of Megan McCabe, Heather Waite, and Stephanie Bess. Waite and Bess outlasted McCabe after clearing 11-9.
McCabe shared third with Christina Stathakis, the field’s highest placing junior.
Bess and Waite dueled at 12-3, but in the end the top spot on the podium came down to misses. On that score, it was Heather Waite who had the cleaner record.
The 3A boys moved through heights quickly after six vaulters exited the runway at 12-1. Just a foot later only three athletes remained. Ryan Milner of Alamosa folded his hand at 13-7 leaving Michael Voss of Bayfield to try and deal with David Jones.
Jones, a senior from Eaton, jumped every bar placed in front of him before he went to a new pole at 13-7. He never fully adapted to the new stick as he ran through the pit for his first two attempts and kicked the bar on the way up for his third.
Voss also struggled with 13-7, and Jones’s pristine set of prior attempts earned him a state championship.
The Eaton Red was quick to pass the credit for his success, “God’s blessed me with some great coaches and some great teammates.”
Jones has committed to continue vaulting at Chadron State in Nebraska.
After the 3A boys concluded, the rain began to warm up with the 1A girls. An ominous gray cloud halted for a moment over Jeffco, and what started as a light sprinkle turned into a quick bout of rain. When the sun punched back through the cloud it shined brightly on the two girls from Vail Christian.
Senior Celia Smith and the current 1A record holder, Taylor Alexander, were already a foot ahead of the nearest competition when they took their attempts at 10-6.
Smith spent her three tries and watched her teammate step on the runway with one final shot to reset her own record.
At the start of the season it seemed that Alexander would make short work of her previous mark, but four weeks ago a shoulder injury made the trip towards a new record a bit of a rocky road.
Just before her last possible attempt at the record in the 2014 season, Alexander’s pre-vault ritual was interrupted by an errant announcement that she had already bested the height that she needed to clear.
“When I heard that I just said, "Well you better get over it now, Taylor.’ There wasn’t much choice for me. I knew I could get over it and I was determined.”
She refocused and handled the height easily.
Using the adrenaline of a new state record Alexander cleared 11-2, and then 11-8. She ended her record-setting run trying for 12-0. Alexander, just a sophomore, finished with a mark a scant inch under the best girl 5A.
Look for Alexander this weekend in the 100m, 200m, and the 4x100m.
more to come as the weekend devlops...
Tweets by ColoradoTrackXC