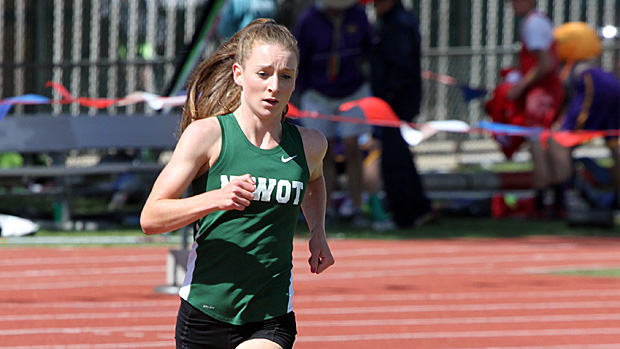 When Niwot wakes up, it's big news for the rest of 4A. After getting shut out on the opening day of the state meet, the Cougars came back with a vengeance on Friday.

You had an idea that the floodgates had opened when Elise Cranny ran 10:17.48. That effort shaved four seconds off of Melody Fairchild's 23-year-old Colorado record for 3200 meters. After dropping the field, Cranny had a more difficult timing dropping the steady north breeze, but she managed to keep her pace relatively steady, splitting the first 1600 in about 5:03 before coming back at about 5:14.

For those with a bent of curiosity, the NCAA altitude conversions interpolated to 3200 meters would give Cranny about 18 seconds worth of conversion on that mark.

The crowd dared to hope that there might be more fireworks in the afternoon session in the 800, but Cranny was content to expend the minimum effort required to win the 800. Had that minimum effort been a 2:07, she very possibly might have done it, but a 2:12 was enough to fend off a hard-charging Ali Deitsch at the finish line. As it was, Cranny barely caught a glimpse of Deitsch in time to fend off the challenge. Perhaps a thought or two of Ephraimson and December passed through Cranny's mind at that moment.

Mountain View and Thompson Valley, the two teams that appear to be Niwot's biggest threats to the throne, did not keep pace with Niwot on Friday and will need big Saturdays to overtake the Cougars. Sand Creek positioned well on Friday, but has more limited point possibilities on Saturday than the other contenders.

Among 4A boys, nobody had a better day than Palmer Ridge. Starting with Eric Hamer's third in the 3200, the Bears kept piling up the nice results. Relays advanced at will. Jordan Swango scored three in the high jump that probably nobody outside of Palmer Ridge themselves either hoped for or expected. The 4x200 took a telling win over Valor Christian. Thomas Busath and Evan Malin advanced easily in the 300 hurdles. The Friday script was written with Palmer Ridge in mind.

Broomfield, on the other hand, got nice points from Ricardo Ocampo and Ethan Gonzales in the 3200, just maybe not as many nice points was they would have liked. The big ten for first place went to Bailey Roth, who closed mercilessly over the last two laps. The Eagles have potential, however, for a big Saturday, and they will need all of it.

Elsewhere, Lindsey Kroboth and Rebecca Harris tag-teamed Durango freshman phenom Alli Davis and relegated her to two seconds in the jumping events. Glenwood's Kaden Weller took the top seed out of prelims in a very tough 300 hurdles field. Zac Petrie laid down the 800 meter law to Liam Meirow and William Mayhew. And Nick Meihaus came up 6-10 kind of big in the high jump.