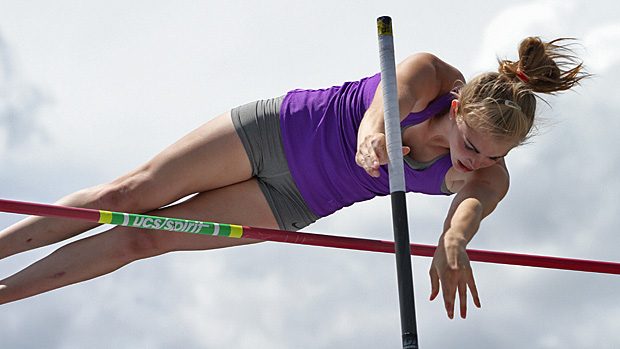 The pole vault on Friday was a small school affair as the 2A boys and girls took to the runway, followed by the 3A girls. The color of the runway aside, athletes wearing red and winning was an undeniable trend next to the track at Jeffco.
The pool of athletes slimmed down fairly quickly for the 2A boys after four athletes were eliminated at consecutive heights of 11-5 and 11-11.
This left Jared Clarkson of Akron and Brandon Hinkle of Yuma to duel at 12-5. They've dueled before. This time it was Hinkle in a red jersey who flung himself over the crossbar. His last successful jump was his first attempt at 13-2.
Hinkle confessed after the event that he had a hard time sleeping the night before due to nerves. Despite this he came to the stadium supremely confident.
“I came in with the mindset that I was going to win.”
Hinkle’s teammate Damian Smith also wore red for his third place finish.
The 2A girls developed in a fashion eerily similar to the boys. The event moved incredibly fast as six of the girls exited after the third height (7-2).
Two increments above that, four of the last five girls missed all three attempts, and three of those girls, Jessica Rossi, Mallory Noble, and Karli Christensen managed to tie for second.
Not to beat a dead horse, but Noble was wearing Yuma red. The Yuma red was also donned by the event’s eventual victor.
Monica Drury, also of Yuma, completed the school sweep of vaults, but unlike her counterpart on the boys side, the championship came as a pleasant surprise.
“I did not know I was going to win. I had a lot of competitors to go against, but I felt amazing.”
Once a pattern was noted one would expect that the ladies of Eaton to excel next on the runway. They did not disappoint.
All three of Eaton’s lady pole-vaulters put up points for the Reds with Bailey Schmacher taking eighth, Jayla Jarnagin tying for sixth, and Jazmin Schwark getting third.
Unfortunately for Eaton, the success of the color red took a darker turn. That is to say to TCA crimson.
Gymnast turned pole-vaulter Andrea Willis of the Titans outlasted Laurel Todd of Estes Park to secure her spot on top of the podium. After getting the win in the bag Willis went after the state record of 11-2 raising the standards just a half-inch over the mark.
She went into the state record books after two attempts at the height.
Willis then moved up to 11-5, but after missing two attempts opted to take her last attempt at 11-6 with a bigger pole. The gambit worked as Willis cleared the higher bar with ease.
The next selected height was 11-9.5. If Willis could clear this she would have been the best female vaulter at the state meet thus far. But that much was not meant to be. After her first attempt it was clear that Willis needed to move to yet another pole. The rookie sensation was not able to adjust and had to settle for a nine-inch PR and a 3A classification record.
For Willis, who has only been vaulting with Above the Bar in Colorado Springs since November, the meet was above reaching higher.
“I was really just focusing on improving myself. I wasn’t really focusing on the state record, or being a state champion. It really had to be about improving myself.”
Aside from the monochromatic nature of all three victories out of pole vault on Friday, all three winning athlete were also sophomores. It is also worth considering that, with Taylor Alexander’s win yesterday, all three small school, girls champions in the vault are in the class of 2016.
Keep an eye on the pits in Colorado folks. Things are looking up.
Tweets by ColoradoTrackXC