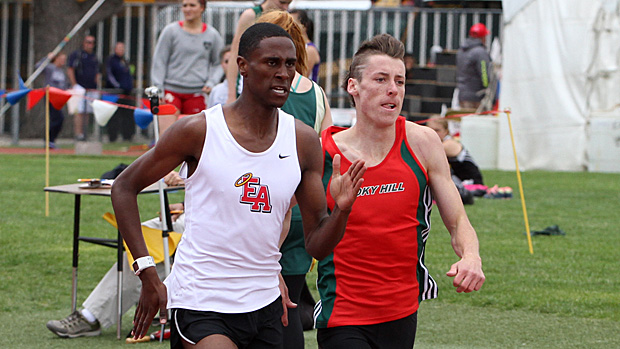 The 5A contests ramped up to their big day on Saturday with a few nice pieces of stage setting.

If it was suspense you were after, the boys 800 had all of that. Blake Yount took the race out hard, but the shadow of Cerake Geberkidane is never far away if the race distance is 800 meters or longer. Early on the second lap, Geberkidane came up on Yount's shoulder and made a contest of it. Yount refused to cede inside position, forcing Geberkidane to take the wider route around turn four. At the top of the finish straight, Geberkidane seemed to falter and the race appeared to be in Yount's hands. But, one final surge from the Denver East senior gave him the victory.

The girls 800 had drama as well, but of a very different sort. The drama here mostly involved nearly the entire back half of the pack going pancake-flat on the track entering the second turn. With 18 bodies running in close quarters, it only takes two feet getting tangled. And, for the indviduals involved, the race was essentially over at that moment. It's doubtful, however, that anyone would have caught Cherry Creek's Jordyn Colter. Colter ran with a clear mission to win on Friday afternoon, setting aside whatever disappointment she felt from Thursday's 3200 for a stirring win. Only Macy Kreutz of HIghlands Ranch was able to keep it close.

The 4x200s went the way of Fourntain-Fort Carson for the boys and Pine Creek for the girs. For Fountain-Fort Carson, the win gives them an early edge in the battle with Cherokee Trail for the team title, but many more events will have their say in the eventual outcome today. Pine Creek was desperately in need of some hope in their battle to reel in streaking Fort Collins, and the 4x200 provided some of that. The Eagles will need more of the same on the final day of competition and will probably also need some help from matters outside of their control.

Fort Collins helped their own cause with a fourth in the SMR8 and another fourth from Lauren Gregory in the 800. At 51 points to Pine Creek's 17 entering the final day of competition, Fort Collins will be difficult to overtake. Also not yet out of the hunt for the girls team title are Fountain-Fort Carson and Cherry Creek.

Carly Paul added to her list of state high jump titles, winning on misses over Rajon O'Quinn and Ashlyn Hare. It's been a while since we've seen three at 5-8 in the same state meet.

It took a 3:58.93 or better to make finals of the girls 4x400. If any of these teams have any gas left in the tank at the end of the day, it should be a rousing final.

ThunderRidge leads the field into today's 5A boys 4x400 final, but this one, too, figures to be as tight as they come.