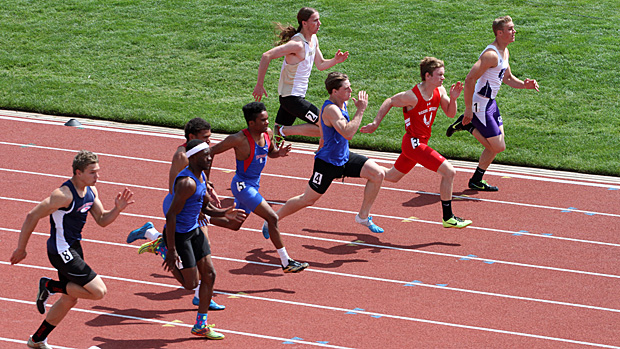 Today, as with any other day, it is impossible to say what might have been. But is is equally true that, to all appearances, this year's 5A boys title was decided the same way it was last year--on account of a tumbling baton.

How big was Cherokee Trail's absence from the 4x400? This big--with all events scored except the 4x400, Cherokee Trail and Grandview were tied for first with 70 points. Fountain-Fort Carson was a close second with 68 points. So, with one event remaining, Cherokee Trail was entirely at the mercy of what the other teams would do in the final. The best possible outcome for CT would be an extremely unlikely three-way tie for first. But, by any reasonable scenario, CT would lose in their bid to repeat as 5A boys state champions.

And that is what eventually happened. Fountain-Fort Carson finished second to pick up eight points and the team title. Grandview finished sixth for four points and would go home as the second-place team.

But, all that came at the end of a long day of the three teams trading salvos of points.

Grandview struck first on the day, scoring eight points between Tristan Sisneros and Isaiah Brown in the 110 hurdles.

Outside the track, all three teams picked up points in the field events, with Cherokee Trail getting seven from Kyree Herron in the triple jump and Grandview getting two from JR Smith. Fountain-Fort Carson canceled most of those points out with five from Kadim Phillip in the shot put. It was a big move for the Trojans as Phillip was not one of the throwers expected to score in the shot put. But, Grandview collected nine more points in the shot put from the combined efforts of CJ Strauch and Isaiah Talbert.

Back on the track, Cherokee Trail gave up some ground in the 100 as Grandview got 11 from Shayne Watson and Kossi Tchenawou, and Fountain-Fort Carson got 12 from Jaysean Skrine and Christian Lyon.

Cherokee Trail covered those losses with 17 from Brandon Singleton and Mar'Keith Bailey in the 400. Both Grandview and Fountain-Fort Carson were shut out in the quarter. Cherokee Trail made a smaller gain in the 200 where Brandon Singleton collected his second event title of the day, but Skrine and Lyon collected nine for F-FC, while Tchenawou and Watson scored three for Grandview. Fountain-Fort Carson had nobody in the 300 hurdles, but Grandview got eight from Triston Sisneros, while Cherokee Trail got seven from Isaiah Kaiser.

And all that served to set up the scene at the start of the 4x400. There, Cherokee Trail could only sit and watch helplessly while a title that seemed theirs for the taking fell into Fountain-Fort Carson's hands. For Grandview, it was a case of oh-so-close and wondering what might have been if the 200 had gone just a little better. For Fountain-Fort Carson, it was a case of redemption after last year's bitter disappointment.

While the battle for the time title was the overarching story of the day, other event story lines played out as well.

Most notable among those story lines was Cerake Geberkidane's valiant effort at taking down the state 1600 title. Unlike some of his other races this spring, Geberkidane wasted no time getting to the front of the field and pushing the pace this time around. It was evident from the earliest moments of the race that a swipe was being taken at Colorado's long-standing 1600 meter record.

Geberkidane was close to the required pace on each of the first three laps. Geberkidane needed about 62 seconds on his final lap to break the record, but got about 63 seconds. Though his winning time came up about a second short of the record mark dating back to 1981, it was at least the fastest in-state high school time of the century to date. A collective sigh went up from the assembled fans; they, too, had hoped to see the record fall.

Connor Turnage of Highlands Ranch closed out his high school career with another win in the triple jump at 48-9.75, but Fossil's Nick Kravec made it unexpectedly close at 47-2.75. Rocky Mountain's Max McDonald won the shot put at 52-2.5. Douglas County's Trey Smith took a first in the 100 and a third in the 200. Bear Creek's Olabisi Johnson outleaned Spencer Long at the finish line of the 110 hurdles, but Long got his title in the 300 hurdles with the state's best time of the season at 37.83.