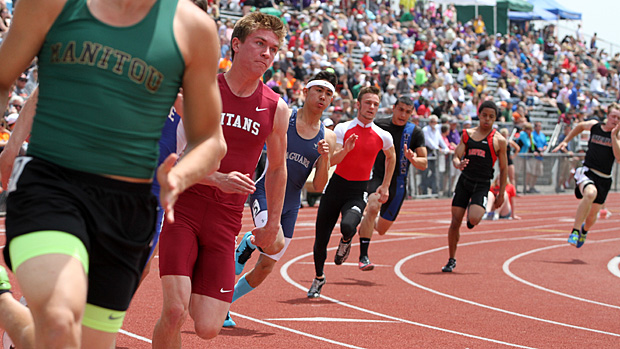 On the landscape of 3A boys track and field, Titans loom large.

Last year's showdown between the Western Slope Titans of Coal Ridge and the Front Range Titans of The Classical Academy took a southward turn when Andy Bowles suffered an injury early on the Saturday finals session in the 110 hurdles. But there would be no premature ending to the story this year on account of an injury. Both teams stayed in the battle through the end of the day.

It didn't necessarily look that way on Thursday, however, when Andy Bowles set a new state meet record in the hurdle bump, sending the weighted hurdle a little more than a lane over and several meters down the track. That hurdle made a big impression on both Trevor Lyons in lane four and on Bowles' own knee. Bowles would be spotted around the track on Friday morning with a slight limp and a bag of ice, but his performances remained intact. Bowles would win the high jump at 6-5 (opting to go directly to 6-9, which he failed to clear, after winning the title at 6-5), finish second in the 110 hurdles at 14.82, and finish fourth in the 300 hurdles.

Bowles was not the only Titan having a big weekend. Chris Contreras was his usual speedy self, taking a fourth in the 100, a sixth in the 200, and a second in the 400. Trevor Kelly added a third in the 110 hurdles, a fifth in the long jump, and a third in the triple jump. When all the adding was done, Coal Ridge would total 90 points.

In a lot of years, 90 points will win you a state title. But this was not one of those years. The Classical Academy Titans would pick this year to post 103 points, only three points off of their highest team total ever.

Two Saturday victories by sprinter Nick Deray fueled the TCA charge on Saturday. Deray defended his state title at 400 meters with a PR mark of 49.12 in the 400, holding off a determined late charge from Contreras in the final meters. Not long after, Deray stunned the 200 field with a 22.28 winning time.

Between Deray's big races, sophomore Jayce Hall delivered another stunner, winning the long jump at 20-10.5. Though accustomed to finding their advantages via the distance route, TCA's biggest blows this time around were dealt in the explosive events.

With the shock of Deray's 200 was still subsiding, Conner Wilburn scored a second in the 1600. Then Jon Roy and Alex Miller stepped to theline in the 300 hurdles. Both would finish their horseshoe-shaped tour of ten hurdles in under 40 seconds--Roy at 38.67 and Miller at 39.65. Holy Family's Ryan Younggreen managed to come between them, but the 17 points credited to TCA's team total were telling points nevertheless. Following the 300 hurdles, it was going to take something near a complete implosion on both remaining relays for TCA not to capture their third consecutive team title.

The implosion never came. TCA finished by taking a fourth in the 4x100 and a third in the 4x400.

A spirited, and senior heavy, entry from Frontier Academy took third at 82 points, easily their best state meet total ever. The Wolverines were led by event titles from Chris Baker in the 1600 and Austin Baumeister in the triple jump.