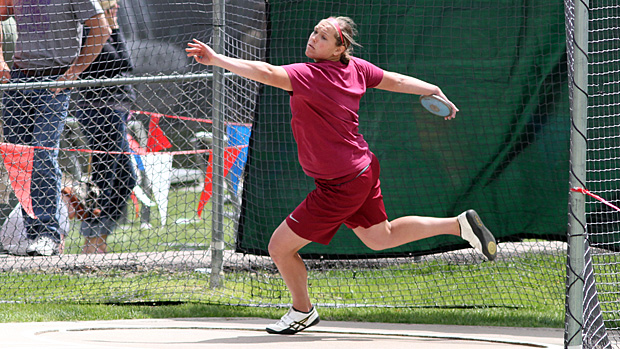 And, though there were some bumps along the road of TCA's final meet as a 3A team, the overall picture was a good one for the Titans. TCA left 3A with a wash in 3A state meet records; Hannah Carr and Andrea Willis added new 3A state meet records and the discus and pole vault, respectively, while Eaton erased TCA's old SMR8 record and Coal Ridge erased TCA's old 4x400 record. Carr's discus throw, however, barely outdistanced another very nice mark by Lamar's Summer Eberhardt, who tied the existing state meet mark on the round of throw's prior to Carr's record toss.

The Titans only event titles came via Hannah Carr's throws in the shot put and discus and Willis' pole vault, but the Titans were not at all shy about claiming mid-range points throughout the spectrum of events.

Like Palmer Ridge's tour de force through 4A boys, it wasn't so much about winning event titles as it was about a relentless presence in the scoring for a large majority of the events.

Though the Titans failed to win a relay, they went home with two seconds, two thirds, and a fourth in the five relays. Although the Ttians do not have a long tradition of piling up sprint points, Brianne Hoglin, Kendra Frieden, and Bethany Johns made certain that TCA was represented on the podium for each of the sprint events. Lauren Hamilton, Megan Percy, and Maddie Mullen collected the more traditional set of distance points and added them to the cause. Kayla Schlaudt became the first female Titan ever to score in the state meet long jump. Leah Hinckfoot added points in the 100 hurdles.

Perhaps the most telling event in the eventual outcome of the meet was the pole vault. While the scoring went fairly close to the seeds, the pole vault is know far and wide as a fickle event. Eaton was trailing TCA in the team scoring at the time of the pole vault, but a great day at the vault would have put Eaton directly back into the contest. And, there was some holding of breath for a moment or two where the pole vault was concerened. Andrea Willis, TCA's top seed in the pole vault, didn't enter the competition until only three vaulters (Maddie Smith, Jazmin Schwark, and Laurel Todd) were remaining. Willis missed on her first attempt, as the entire TCA and Eaton crowds bit down on their lower lips.

Willis' second attempt, however, produced a clearance and the rest is history. The bar kept ratcheting up for Willis, first to break the 3A classification record at 11-2.5 and then to set a new mark of her own making at 11-6. By virtue of scoring three vaulters, Eaton gained ground on TCA in the pole vault scoring, but not nearly enough ground to get to where they needed to be. The opportunity to close on the Titans in a serious way passed unfulfilled, and the rest of the meet saw only a small widening of the distance between first and second.

In addition to ushering TCA out of the ranks of 3A, the meet may have served as 3A's introduction to a new top-tier athlete in its midst.

If you've been paying attention to the 3A results for the last month, you've perhaps noticed the name of Faith Christian freshman Sarah Yocum. If you were anything more the comatose at the state meet, you couldn't help but notice.

Yocum demolished the 3A hurdle fields, winning the 100s in 15.51 and the 300s in 45.33. She placed fifth in the 400. She qualified for, but did not run, the finals of the 200. It's been a long time since we've seen a 3A freshman make anything close to that kind of impact on the state meet. We could be staring down a very entertaining three years ahead.

Elsewhere, Moffat County Kayla Pintt served notice to the 3A sprint field that she has no interest in slow winning times. Cruising through prelims in what looked suspiciously like a lower gear, Pintt went full-throttle in finals, winning the 100 in 12.04 (+2.2) and the 200 in 24.57 (+0.2). Moffat County would also snare a couple of high places in the 4x100 and 4x200.

Estes Park senior Kelsi Lasota closed out a very nice high school career with wins at 800 and 1600 meters, Better still, she'll be able to remember her last state meet as the time she ran her best-ever high school times. Lasota ran both races in PR times, dipping below 2:20 for the 800 and hitting 5:06 for the 1600.