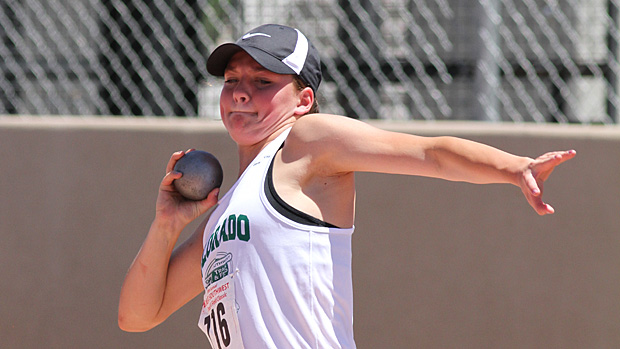 The sun beat down on everyone today, but Erika White had a plan for dealing with it. Photo by Alan Versaw.

Colorado sent a large delegation of multis athletes to Great Southwest, but there has not proven to be safety in numbers. Most of Colorado's multi-event specialists have struggled on day one to keep pace with the competition from states like Missouri, California, Texas, and Nevada. For the most part, those Colorado sent down were short of the kind of multi-event experience that runs deep in some of the talent they were up against.

Colorado had no entries this year in the girls decathlon, so we move directly to the girls heptathlon, which completed four of its seven events today. None of the top eight overall places belong to the Centennial State, and if you would look for highlights, you must find those highlights in performances here and there rather than big-picture kind of results.

Kiara Kearney, one of Colorado's most recent track and field sensations, continued her run of success with the high jump with a leap of 1.59 meters, tying her for 8th in the competition. Erika White donned a hat to shield her face from the harsh Albuquerque sun and produced very much as expected in the shot put, throwing 10.23m for fifth.

No other Colorado girls managed a top-ten finish of any of the four contested events of the heptathlon.

Although it was a smaller field (only 17 athletes) in the boys decathlon, the road to all-around success proved just as arduous for the Colorado boys. Michael Jacobson slipped into the top ten of the 100 with an 11.93. Kyle Rex notched a top-ten finish in the shot put at 11.03m. And that wrapped up Colorado's top ten representation on the day.