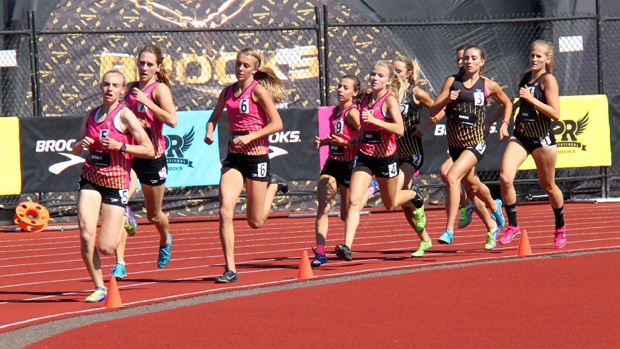 Katie Rainsberger works into the strong position early in the mile. Photo by Scott Knoblich.

There were a few PRs to go around at today's Brooks PR meet, but not as many as you might have expected. Wind may have had something to do with that.

Colorado's day began with Cerake Geberkidane's two mile. And, though Geberkidane led through most of the middle portion of the race, when caution was thrown to the wind on the final 600 or so meters, Geberkidane had less left in the tank than some of the field, ultimately taking sixth in 8:58.08.

A few minutes later, Kevin McClanahan would finish fourth in a stacked 400 field at 48.71. As McClanahan's time suggests, times were slightly off for the entire field.

Next up for Colorado was the girls 100 hurdles where both Dior Hall and Ashley Miller were representing Colorado. Hall and Miller would finish first and third in 13.32 and 13.56. The times were not PRs for either, and wind data is not readily available at the time of this writing, but the efforts--needless to say--positioned them very nicely in the elite field. Hall managed to hold off a strong charge from Jasmine Quinn to take the win.

As a sophomore consistently running in the mid 13s, one can't help but wonder what Miller's next two years may hold.

Colorado's day would end with what was arguably the highlight of the day for Colorado's five representatives. Katie Rainsberger, stalking from third through most most the race, surged hard on the final lap, taking over second and eventually getting within sight of eventual winner Sarah Feeny. Rainsberger's 4:41.07 was an enormous PR (the en route 1600 time figures as about a nine-second PR) and put her at #2 on the all-time Colorado high school girls mile list. Only Elise Cranny's indoor 4:40.62 from 2013 ranks ahead of Rainsberger's time.