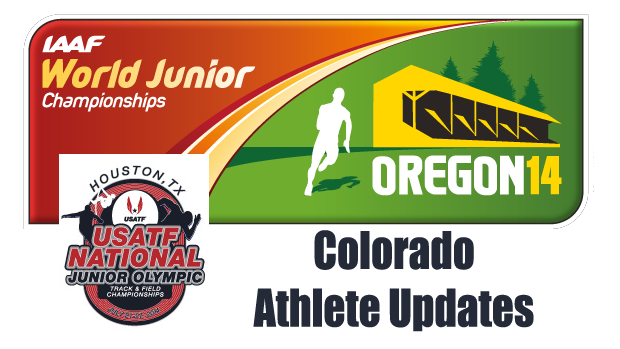 Regular updates on the performances of Colorado-connected athletes at USATF JOs and World Juniors.

Please note that these reports will be restricted to athletes in the 15-16 and 17-18 age groups from USATF JOs. There are too many athletes with names I do not yet recognize in the younger age groups and I don't want to mention some and overlook others.

It was probably a day Haley Showalter would like to forget, as three consecutives fouls kept her from advancing in the hammer throw competition at World Juniors.

From Houston, Chasidy Horton (Fountain-Fort Carson) finished 14th and Erika White (Brighton) took 17th in the women's heptathlon. Interestingly, the throws went well for both. Horton finished fourth in the javelin (99-9.75) and White finished third in the shot put (32-5.75), marking the high finishes in the seven-event competitin for both Colorado athletes.

Up in Eugene, it wasn't Valarie Allman's best discus throw ever, but her 171-9 in prelims was good enough to advance her to the final round (throws of 52 meters or better were required to advance) on Friday evening. Allman got her mark on the first of three allotted throws and was able to rest her arm while others kept going until reaching the standard or the three throws were spent.

Things were a little more lively where Colorado was concerned today in Houston.

And, folks, that all happened before noon. In the afternoon session, we saw the following:

And, unless I've overlooked somebody (very much a possibility), that wraps up the day's action for Colorado individuals.

It was a very good Friday for Colorado's entries at World Juniors. Dior Hall advanced to semi-finals of the 100 hurdles with a 13.29 win in her prelims heat. Bailey Roth and Elise Cranny ran smart, patient races to advance to finals in the 3000 steeplechase and 1500 meters respectively. Roth's time of 8:48.60 establishes a new US high school record for the 3000 meter steeplechase, giving Roth both national steeplechase marks. Cranny's 4:15.21 wasn't a final round kind of time but accomplished the essential--advancing her to the final round. Hall competes in semis on Saturday, while Roth and Cranny await Sunday's final for their events. And, late in the day, Valarie Allman claimed a silver medal in the discus finals with a throw of 186-2 (56.75m).

Colorado's day at World Juniors began 13.09 seconds after it started. That is all the time Dior Hall needed to qualify for tomorrow afternoon's finals of the 100 hurdles as the #2 seed. Hall has one remaining opportunity to set the US AT #1 high school 100 meter hurdles mark.

Colorado's representatives saved their best for last at the World Junior Games. The day ended with two US #1 AT marks for Colorado, one for Dior Hall and another for Bailey Roth. Dior Hall's 12.92 100 hurdles mark was wind legal and should stand as the best-ever high school mark in this nation. Hall ended up with silver as the win went to Kendell Williams of Georgia (race video and interview here). Bailey Roth took tenth in the 3000 Steeple and lowered his own national high school record by a little over a second with a final time of 8:47.04 (Sunday on-site summary--includes Bailey Roth interview). And, finally, Elise Cranny got the elusive win over Alexa Efraimson and finished fourth in the 1500 at 4:12.82 (race video and Elise Cranny interview).

When MileSplit intereviews go up for these performances, I will post links to them in the text above.