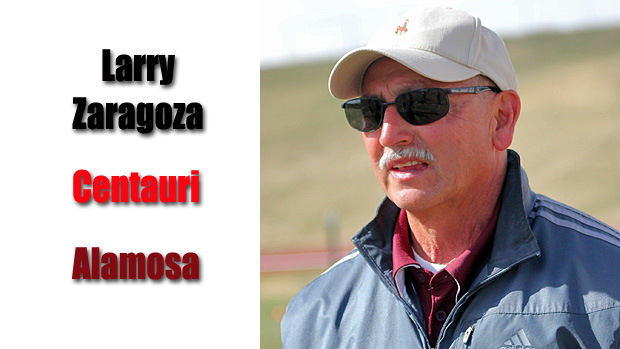 When it comes to longevity in the cross country business, Larry Zaragoza currently has no rivals here in the state of Colorado. Photo by Eric Flores.

It's strange that one of the most lasting memories of my senior year of high school was getting routinely thumped in track by Centauri. Perhaps stranger still was the fact that I recall the name and reputation of their coach--a young, charismatic, and fresh-out-of-grad-school type. It was near-impossible to miss his presence at meets in those days.

If the race was anything over 400 meters, it was no contest. We were always trailing the white singlets and red shorts of the Centauri Falcons. Where Centauri distance was concerned, their only real rival within the state of Colorado was a couple hours drive north at Lake County.

I despised losing to Centauri everywhere we went (and San Luis Valley teams rarely traveled out of the valley in those days, so we saw them pretty much every weekend). Little did I realize I had pitched my battle, losing though it was, against a man who would one eventually become one of the true legends of Colorado high school distance running--Larry Zaragoza.

In the 38 years between the fall of 1976 and the fall of 2014, Larry Zaragoza has become the first, and only, coach in Colorado high school cross country history to win both boys and girls state titles at two different schools. He lacks only a boys state track title at Centauri to complete his set of state titles at two schools in track and field as well.

And all of this is, as Zaragoza tells it, the result of a mistake, "I went straight from Adams to teaching and coaching by mistake. I was planning on joining the Navy after my master's degree but instead went for an interview at the request of Coach Joe Vigil... and was hired that very afternoon to teach driver's ed, physical and earth science. My coaching duties were assistant football and freshman basketball.  I volunteered to coach the distance runners in track my first year.  I became the head coach for track and cross country in 1976 and also was reassigned to teach physical education."

Near-legendary status as the coach at Centauri High School gave Zaragoza some local notoriety that probably helped in landing the same job at Alamosa High School in the early 1980s. But things didn't go smoothly at first at Alamosa, "There were many challenges during my first year of teaching and coaching at Alamosa.  Most of the coaches had some resentment towards me because of my success at Centuari High School, so I had to make friends and earn respect for almost two years. Still other challenges were finding bodies to form a  cross country team... Yet another challenge was the birth of my first son who had physical and mental challenges which were recognized early on in his baby years."

But Larry Zaragoza proved more than the equal to the challenges. By 1985, Zaragoza had won his first cross country state title at Alamosa and his teams remained a fixture among the top teams in their classification for years to come. His most recent state title came in 2009, Alamosa's last year in 4A, when his girls team stunned the field at the Fossil Ridge course in Fort Collins to win the 4A title. Zaragoza's second-place finishes are the stuff of legend. Probably no coach in the state--regardless of sport--rivals the tally of second-place finishes that Zaragoza's teams have earned in track and cross country. Alamosa's most recent second place finish came in 2011 in boys cross country.

Although Zaragoza is currently the longest-tenured cross country coach in the state, that wasn't the plan from the beginning.

"I really had no idea that my coaching career would last this long. I will be coaching my 40th year as a coach and 38th year as a head cross country coach.  I sometimes see the light at the end of the tunnel, but the passion for contributing to the development of young people is still present.  Someday I will walk away, but until then I will continue to show up to practice and take care of business.  I somehow think that my college coach Joe Vigil might kick my rear if I give up coaching."

That one-part-fear-one-part-admiration of Coach Vigil is a recurring theme in the lives of many who ran for him at Adams State back in the day. Evidently, the man and his ways never get out of your system.

Zaragoza has already retired from teaching, though his current reponsibilities include being mayor of the town of La Jara, 15 miles south of Alamosa (and the home of Centauri High School).

Pressed for a reason for his amazing longevity with the sports of track and cross country, Zaragoza simply offers, "I was saved by my introduction to running in high school, and I know that the sport, or sports in general, are the other half of education.  I could coach for 30 more years and still not pay back what running and coaching has done for me as a person."

"I have definitely learned to relax more at meets and have tried to enjoy the young people for who they are. Most of them have great personalities and are very eager for adult conversation and guidance. I have never coached with the philosophy of preparing athletes for college.  If it happens--and it has many times--that is a great plus!  I enjoy coaching the athletes for today. I also understand the training of the athletes much better. I continue to attend as many clinics and symposiums as I can, and I love to read about other programs and how they do it."

For those wondering, Zaragoza explains, "I also ran with my teams over the years. I quit running with the team on a daily basis in the late 1990s." There was no doubt in my high school mind that he was running with his Centauri teams in the late 1970s. And I envied Centauri on account of that.

Zaragoza came to Adams State and the San Luis Valley out of Lafayette High School* in the late 1960s. Zaragoza reminisces about his high school experience, "I started running in high school my sophomore year.  I ran the 880 yard dash and the 440 in my day and captured a state title in 1967 (1:56.8) which was a new state record.  I ran much better my senior year until the league meet one week before state.  I refractured my ankle and could not defend my title.  I so wanted to break the all-class record which was around low 1:54s, [but] I had to watch from the sideline and the winner was around 1:58.  I really loved the sport and was recruited to run at Adams State College under Coach Joe Vigil."

Zaragoza's greatest success in college came at 600 meters, where he was an NAIA national indoor runner-up as a sophomore and a national champion as a junior. Illness would relegate him to third place as a senior.

It's probably not a great idea to ask Zaragoza about a favorite memory from his reservoir of coaching experiences unless you have the time to listen. You will hear tales of the girls team at Centauri that won the first-ever girls state championship in Colorado, the 2009 Alamosa girls team, the days of the "Hole in the Wall Gang" at Centauri, you will hear stories of coaching children of runners he coached in his early days at Centauri, and many more. But, if you mean to know something of the flavor and color of Colorado high school cross country history, you can't help but listen.

There will come a day when Coach Zaragoza walks away from it all. A new dean of cross country coaches will take his place. But, for now, the legend walks and coaches among us. Enjoy the time while it's here. Take a moment to walk up, shake hands, and make his acquaintance (if you haven't already) at a meet. Then ask him to tell you a story.