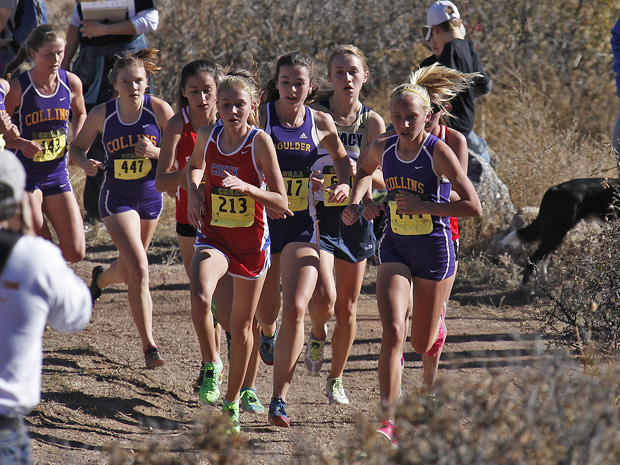 If you know where these competitors are, you know the answer to one of the trivia questions. Photo by Jeff McCoy.

It's almost cross country season. It's time to dust off your knowledge of the sport we hold dear. The questions below will gradually increase in difficulty, just like the courses for which they were named. If you've been reading Colorado Track XC over the last couple of years, many of these questions have been answered in articles posted on the site. Have fun! You may look these up--that is half the fun, after all--unless the question says not to, but try to work through them on your own first.

3. How many runners and scorers per team in 3A this fall?

4. Name two long-time head coaches who have left their positions since the end of last cross country season.

5. Bill Stahl's fall-in-the-water-and-get-wet meet was held where up until this last year when the park adminstration said, "No more."

6. What was the state cross country distance before it was 5K?

7. On the official state meet course map, what is the name of the first climb, a little past the one-mile mark?

1. What high school did Chris Severy of Running with the Buffaloes fame attend? What was his other sporting passion?

2. What is the smallest school in Colorado that fields their own cross country team?

3. Who is the CHSAA associate commissioner over cross country?

6. The Arapahoe Warrior invitational is held at what venue?

1. What course hosted the fastest boys high school 5K ever run in Colorado?

2. What course hosted the fastest girls high school 5K ever run in Colorado?

3. In what year did 5K become the state meet course distance for cross country?

4. Randy Cooper made his fame coaching at Moffat County. Where did he end his high school coaching career?

5. Who was coach at Clear Creek High School during their glory years and also the architect of the old Georgetown cross country course?

7. Noah Hoffman was the 2006 3A boys state cross country champion. In what event did Hoffman compete in the Olympic Games?

2. Who was coach at Durango High School during their glory years?

3. What is the most recent year that a state cross country meet was postponed due to snow?

6. Who was the high school coach of the two runners mentioned in the question above? Spelling counts.

7. Which current collegiate coaches in Colorado also previously coached at the high school level in the state?

1. Name five sibling pairs who have been state medalists in the same year

3. Name a San Luis Valley high school that has never had a cross country program of their own.

4. Name all Colorado schools that have had a team run at Nike Cross Nationals.

5. According to the state meet program, who is credited with the Colorado boys state meet record for 5K cross country?

7. Name two teams (must give the year as well as the school) that have won state titles wearing alternate uniforms.

1. Name two state individual title winners who ran for a school they did not attend.

2. Name a Lake County head coach, other than Frank Mencin or Dick Anderson, who won a state title at Lake County.

3. What school did Basalt head coach Ron Lund coach at before taking the position at Basalt?

5. Who was the only Colorado high school girl ever to beat Melody Fairchild in a state meet race?

6. Name two schools that own at least five second-place finishes at the state meet (boys and girls combined) but which have never won a state title.

7. What was Emma Coburn's highest finish in a Colorado state cross country meet (note that she ran in 3A before there was a separate 2A division)?