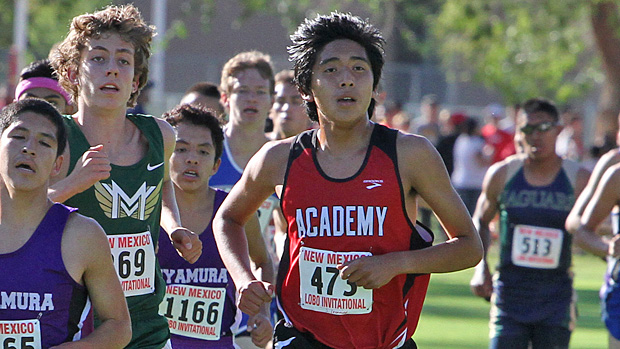 As you start thinking of out-of-state entries who have the potential to snare a Liberty Bell crown, Jordan Lesansee of Albuquerque Academy should be on your list. Colorado Track XC file photo by Alan Versaw.

Pity the poor coach who has the idea of "training through" at Liberty Bell. He (or she) would not survive the team mutiny that ensued. This is the one invitational meet all season where you can pretty much figure that nobody is holding anything back. If you were, you would be running someplace else or taking the weekend off.

And a meet like this warrants a race-by-race breakdown, so here we go:

Frontier Academy likely holds the upper hand here. If the Wolverines run like they have on their previous times out, it will take a superlative effort from the rest of the field to chase the defending 3A state champions down. Saratoga is the lone out-of-state entry in this division and they come in as something of a mystery. Individually, this race is a great opportunity for some heretofore mostly unrecognized runner to state up and earn some name recognition. No prohibitive favorite stands out.

With the change in 3A scoring this year, I'm going to guess that Liberty Bell goes to scoring five this year, but I do not have definite word on that. If they do go to scoring five from scoring four, that potentially makes things a lot more difficult for the Heritage Christian Academy crew. But things will be difficult enough as they are with teams like Colorado Academy, Kent Denver, and Estes Park in the field. Individually, Lily Tomasula-Martin has mostly had her way with races this fall, but the presence of Berthoud in this race means Tomasula-Martin must square off with Kiah Leonard. That should make for an interesting race.

Wyoming powerhouse program Laramie comes down for this one. Though Laramie lost some strength to graduation this spring, they likely still figure as the favorite. But Scottsbluff (NE) won this division last year and is likely to have something to say about the eventual outcome. Top Colorado entries in the race could include Evergreen, Valor Christian, and Centaurus. Scottsbluff's Matthew Barraza is the defending champion of this year and should figure as this year's favorite as well.

I'm not sure how Shining Mountain slipped into Division 3, but they're bound to meet up with all the competition their hearts desire in this one. Ginger Hutton is listed as an entry for this one, and it will be interesting to see how she opens her season after sitting out the first couple of weeks. Regardless, with out-of-state programs representing something of an unknown quantity here, Evergreen and Steamboat Springs have shown well in early action and will be at least among the favorites for the team title. Taylor Muncie of Scottsbluff should be returning to defend her individual title. If she isn't careful, though, Caitlin Schmitt ran very well in her season opener.

It starts to get highly competitive here, folks. High-end Colorado programs like Heritage, Battle Mountain, Cheyenne Mountain, Thornton, Broomfield, Loveland, Mountain View, Thompson Valley, Niwot, ThunderRidge, Pomona, and Rock Canyon dot the list of entries. Go ahead, pick your favorite from that mob! And, the idea of a William Mayhew/Marcelo Laguera/Zachary Alhamra showdown for the individual crown is more than enough to keep fans glued to the edge of the course. This should be among the finest D2 races in Liberty Bell history.

What can be said about D2 boys holds true pretty much across the board with D2 girls as well. The list of top teams varies some, but includes Battle Mountain, Cheyenne Mountain, Broomfield, Loveland, Mountain View, Thompson Valley, Niwot, ThunderRidge, Rock Canyon, and, of course, Pine Creek. Can any of these teams threaten Pine Creek? We shall see. Individually, you have Riley Cooney, Lauren Offerman, Athena Kuehn, Kamryn Hart, Jenna McCaffrey, and probably a couple more to think about. Like the boys, it should be grand. Late note: the D'Evelyn girls are not entered in Liberty Bell and Lexi Reed will not be running there.

There is no Mountain Vista and there is no Palmer Ridge, but there are Albuquerque Academy, Boulder, Monarch, Arapahoe, Chaparral, Fort Collins, Fairview, and Smoky Hill. Whoever pulls this win out of the bag gains some serious intimidation points. The list of potential individual winners is lengthy, but includes notables such as Dom Compoz, Blake Yount, Satchel Caldwell, Tyger Roch, Daniel Book, Keaton Schelir, and Jordan Lesansee. There's a good chance the D2 race ends up with a faster winning time, but the depth is bigger here.

Are you about ready for a fully-loaded showdown between Fort Collins, Cherry Creek, and Monarch? Well, this is the place it all happens. And, don't get too anxious to count Albuquerque Academy and Fairview out of the mix. The teams in red could be capable of dropping some big bombs if the big three get careless. Jordyn Colter, Lauren Gregory, Maya Browning, Holly Bent, Ashley Bock, Megan Mooney, Emma Gee, Lindsey Koch, ... --who doesn't want to see how this all plays out?

Yes, there will be much on the line come Friday afternoon. Part of the equation, however, will be which teams and which individuals can best adjust to chilly conditions. Friday is likely to be the coldest day in Colorado since early May, and doubtless that could mess with a few minds out there.

Check back here for results and photos, starting later on Friday evening!