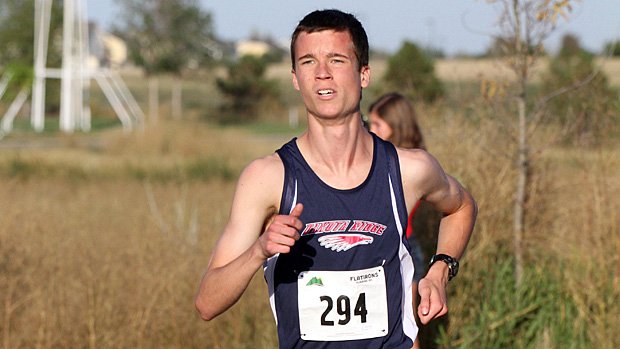 Chris King and his Dakota Ridge teammates will be among the masses at the Dave Sanders Invitational on Friday. Photo by Alan Versaw.

While there will be invitationals all the way through October 11, the count of such meets starts dropping dramatically after this week.

So, what can we look forward to this week?

The week of invitationals starts with the everyone-gets-wet meet hosted by Littleton. If you didn't get wet enough the first time at DeKoevend Park, you have a second opportunity! Or, if you just like getting wet repeatedly during a cross country race, this one is your golden opportunity. The meet is traditionally very well attended, going back through its long history at Addenbrooke Park in Lakewood. Same meet, same concept, new location. And the middle school division is even larger than the high school division.

Canon City runs their home invitational on Thursday. After one year at Royal Gorge Park with the state's grandest (and also driest) creek crossing, fires at Royal Gorge disrupted the routine. Last year and this, the Canon City meet has been held at Pathfinder Park near Florence.

But, it doesn't let up much on Saturday. In fact, it just might possibly be even more intense on Saturday. Liberty Common hosts a smallish meet in Fort Collins on Saturday. Joining them on the Saturday calendar are the Mancos Chicken Creek Challenge, the Salida Invitational, the Summit Invitational, the Lake City Cross Country Invitational, the Anna Banana in Grand Junction, the Pat Patten in Boulder, Rampart's Foxes and Hounds meet in Colorado Springs, and the Castle View Invitational in Sedalia.

Colorado Track XC on-site coverage is lined up for the Loveland Sweeheart, Lake City, Anna Banana, Pat Patten, and Castle View. I am a little overwhelmed just trying to think about managing all that, but we'll do what we can as fast as we can.

We should note that the Pat Patten has pulled up roots from its old location next to Fairview High School at Viele Lake Park and will now be running on the CU course at South Buffalo Ranch. There will be a few more rocks and a lot less Kentucky bluegrass on the new course. The hills probably rate as a toss-up. Most of you attending the meet probably already know this, but only buses will be allowed to park at South Buffalo Ranch. The rest of the crowd will be parking at an RTD park-and-ride and walking a half mile or so to get to the course (and there's plenty more walking to enjoy once you get there). I'm hoping that's a fairly spacious park-and-ride...

With all of that, we're still not done yet discussing the week ahead. This is sort of the designated weekend for out-of-state travel. This year's featured out-of-state experience takes Greeley West to the Rapid City Invitational on Friday after watching buffalo stampede in Custer State Park. One wonders about any impacts that field trip might have on how the Spartans take it out from the starting line in Rapid City. In any case, it's probably better than standing on the observation deck at Mount Rushmore with 8000 other people and simultaneously wondering if you've really seen everything there is to see in the first five seconds you're there. Rich, don't get yourselves disqualified, okay?

Chaparral and Pine Creek (and maybe more) go to Rim Rock, where there is actually now a 5K race for girls. Slowly, but surely, 4K cross country for girls is dying out and this is yet another manifestation of that trend.

Frontier Academy heads to the Griak in Minnesota. Cherry Creek has a big TBD on their web site schedule for September 27.

Other meets that could easily draw Colorado entries include the Bob Firman in Idaho, the Oklahoma State Cowboy Jamboree, and Nike Pre Nationals in Oregon. I don't currently have word of any Colorado schools attending, but neither would I be suprised...