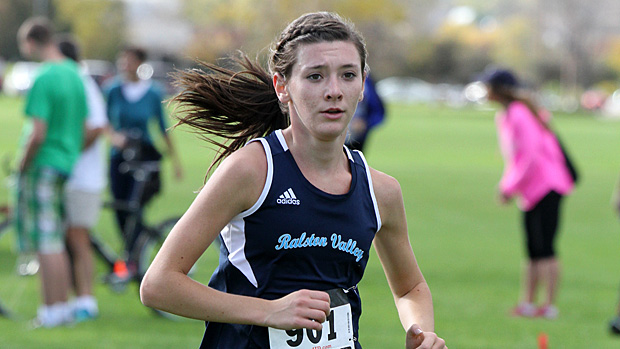 Katherine Bearup got Ralston Valley rolling toward a team title with a fourth-place finish in the 5A girls race. Photo by Alan Versaw.

If you like hanging around at the finish line trying to figure out who won the team scoring, the Jeffco 4A/5A Championships made for an afternoon of delirium. Most of the afternoons races created a great deal of finish line nail-biting.

Racing began with the 4A boys. It didn't take long for Golden teammates Alec Hornecker and Brian Whitfield to take up their places at the front of the pack like they belonged there. The gap between Hornecker/Whitfield and the rest of the field only grew larger as the clock marched forward. And that meant that Golden enjoyed a decisive early advantage in the team scoring.

But cross country takes five to score, so there will still plenty of reasons remaining to keep up the watch. Green Mountain's Stephen Haas finished in third, but didn't create too much of a stir in the team scoring--Green Mountain figured as a long shot for the team title going in. On Haas's heels came a pair of Valor Christian Eagles, and then a pair of Evergreen Cougars. And so the story got interesting in a hurry.

With all three of the top contenders in a strong position on their first two runners, the outcome would be decided on finishers 3, 4, and 5. Valor got the first step up when senior Luke Bruns snared eighth place. Golden responded with junior Luke Bruns in ninth. Evergreen stayed in the hunt with Will Michener in 11th. And you couldn't help but think about Evergreen's depth...

Although down a few points to both Golden and Valor after three runners, all season long it's been the depth of the Evergreen squad that has pulled the Cougars to success. And this day would be no different. Aaron Wald finished in 13th, Paul Rice in 19th, and Victor Reese in 22nd--all before either Valor or Golden scored their fourth runner.

That is how races get won. And Rob Wright was grinning from ear to ear over his boys' performances.

Next up would be 5A girls. Ralston Valley and Dakota Ridge seemed like the main contenders for the league title going in and nothing in the early stages of the race told a story any different. Later in the race, it was still the two-tone blue of Ralston Valley and the maroon of Dakota Ridge occupying a disproportionate number of places up front. Lakewood would close the gap a little on both teams by the end, but not enough to mount a major threat to either.

The individual battle played out with a surprising twist at the end when Arvada West senior Erin Rawe-Thomas overtook a seemingly insurmountable lead by Columbine's Noelle Cobb just before the finish line, but the team scoring battle would arrive in the next wave of finishes.

Katherine Bearup of RV would get things going with a fourth. Cayli Hume--a name we haven't heard in a while--responded for Dakota Ridge with a fifth. The RV's Alicia Thompson and DR's Mia Valerio repeated the theme in sixth and seventh. Through four runners, Ralston Valley added a 10th and a 13th, while Dakota Ridge responded with a 11th and an 12th. Everything hinged on the fifth runner, and Ralston Valley prevailed when Hannah Kurath crossed the line in 14th. So dominant were Ralston Valley and Dakota Ridge that they divided 12 of the first 17 places between them. Only two of the places between 4 and 17 wore the colors on any other school.

On the alternating staggered start system used by the meet, 5A boys came up next. The contest figured to come down between Pomona, Arvada West, and Dakota Ridge, and there really was no point during the race where the prognostications seemed at all suspect. 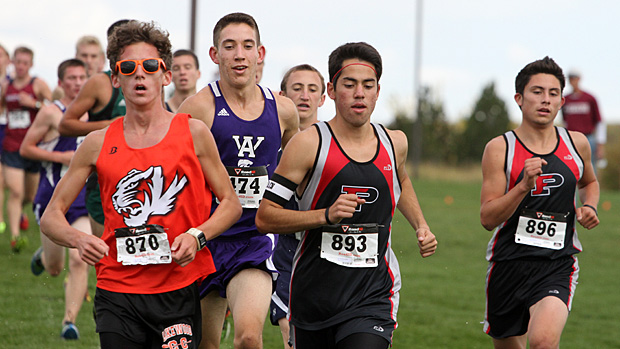 The top finishers in 5A boys went to the front early, though it was Joseph Horen who seemed to be having the most fun. Photo by Alan Versaw.

Pomona's Marcelo Laguera opened a large lead and would go on to win in 15:37. Laguera would be followed by A West's Joseph Horen and his own teammate Gavin Mason. Pomona thus held a nice early advantage, but scoring gaps have plagued the Panthers all season long.

Arvada West got two more top tens from Max Sevcik and Josh Campbell. Pomona got another top ten from Ernest Frannsen. And, just about then, the tidal wave of Dakota Ridge maroon came into view. Dakota Ridge gobbled up places 9, 12, 13, 14, 16, and 17. It seemed impossible for either Pomona or Arvada West to survive that assault, but A West quietly slipped in an 11 and a just-in-time 26 to get the better of Dakota Ridge. Pomona would fall three points in back of DR for third.

And all that set the stage for the most anticipated race of the day, the 4A Girls showdown between Wheat Ridge, Evergreen, and Green Mountain. All three teams have been doing well all season long, and it isn't lost on anybody that they see a lot of each other in the championship season. This would be round one of that season.

As expected, Lexi Reed and Lauren Ogg ran away with individual honors, far ahead of the rest of the field. But, Evergreen's Caitlin Schmitt got the team battle scoring underway with a solid third for Evergreen. Cammy Sargent of Green Mountain and Amy Leasure of Wheat Ridge responded for their teams in fourth and fifth, respectively.

Wheat Ridge appeared to gain a little advantage when Emily Gallegos-Francksen and Macie Browne placed seventh and tenth, but Evergreen crept right back into it with Cat Moss, Lauryn Jeans, and Camille Morales going 9th,11th, and 13th. Green Mountain made their reply with Bailey Sharon and Morgan Effrein in 15th and 16th. Still anyone's race...

Evergreen, however, would close the door when Kate Gibson crossed in 18th. The grin on Rob Wright's face grew a little wider. A sweep of the team titles will do that for you.