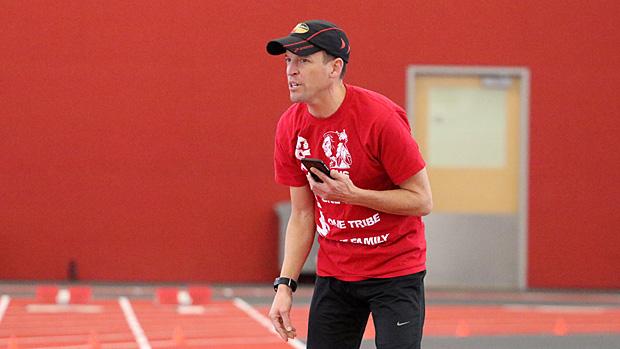 In only three seasons as a coach at Central, Ted Leblow has helped bring about a remarkable change in the program. Photo by Alan Versaw.

For many years leading up to the fall of 2013 people expected very little from the distance program at Central High School in Grand Junction. And, to be brutally honest about it, their expectations were mostly met.

A generation ago, Central had been a proud cross country program, regularly crossing swords with the titans of that day, schools like Durango and Grand Junction. But, the fire in the program had long since gone out, and the program lapsed into a seemingly hopeless state of disrepair.

The changes were quiet at first, but, if you were paying attention, you could see signs of life emerging from the wreckage. Beginning in the fall of 2013, Central began finishing someplace other than last at cross country meets. And, when you are both accustomed and resigned to finishing last, finishing any place other than last is a monumental step forward.

Not coincidentally, the fall of 2013 also marked the arrival of a recently-retired US Army officer at the Central campus. In addition to teaching the Army JROTC program at Central, Leblow had signed on as the assistant cross country coach (a role that would develop into coaching distance in track and the head cross country coach position in 2014).

Leblow recalls the daunting task of resurrecting the cross country program when he arrived, "When I arrived we had about 5 boys and 4 girls show up for cross country the first week of official practice. Through some hallway recruiting we ending up with 11 boys and 7 girls after a few weeks."

It has been full throttle forward since then. An off-season running program, the Warrior Running Club, was developed. In 2014, once the program was stable, invitations were extended to athletes from other teams in the Grand Junction area to augment the ranks of those training in the off-season and build a greater sense of camaraderie among the local high school running community.

"I have always believed that anyone can be a runner. That is the great thing about our sport... It is amazing to see the improvement that can come through hard work and consistency. We have worked hard to give our athletes the ability to make running a year round sport or lifestyle."

Outdoor track season brought greater numbers still. Under Leblow's tutelage, Central saw distance times that seemed, against the background of the recent past, almost the stuff of dreams: Emily Stull posted a 5:32 1600 and a 12:05 3200. Leblow's son, Jared, ran a 10:35 3200, three boys dropped below five minutes for the 1600. Enthusiasm spread through the program like an out-of-control infection.

The next major change arrived when Leblow spearheaded the relocation of Central's home cross country meet from a flat, sidewalk-laced park adjacent to the campus to a more Spartan location at The Trails at Matchett Park. The unmanicured setting in the shadow of Mt. Garfield, though not as convenient to the school, brought a more traditional kind of setting to cross country than Grand Junction had witnessed in many long years.

Weather conditions smiled on Leblow's daring move; the skies emptied and the congregated athletes enjoyed a mudbath that will never be fully washed out of their memory banks. Leblow's boys, signalling the emergence of a new era, finished second among seven complete teams that day.

Triumphs, small and large, continue to arrive at the doorstep of the program. You will see Leblow and some of his runners in Boulder this weekend if you show up for USA Cross Country.

And, if you've seen Leblow at a meet, you already know he's a hands-on kind of coach. Encouragement for his runners is only as far away as Leblow can approach to the track or course:

"My coach in high school, James Frost, had a huge impact on me as a student and an athlete. He truly cared for each runner on the team and was very passionate about each of us doing our very best and achieving success both at running and academically. He did his best to be at as many locations as possible during cross country to encourage us and keep us going. I always appreciated the effort he put in to encourage us as much as possible... I try to do the same for all of the athletes I coach. I probably put in up to 8-10 miles at some cross country meets doing my best to encourage every one of our athletes as much as possible at as many locations as possible throughout the race."

For Leblow, running has been more or less a lifelong passion. Between interruptions to injury and deployment to Iraq in his service days, he posted best marks that included a 2:28:31 marathon and 32:15 10K. As a high schooler in California, he ran 9:28 for the 3200. After two years at Idaho State, Leblow transferred, ending up eventually at Oregon, and ran a year under the legendary Bill Dellinger.

What we have here is another bright light, another remarkable ambassador for the sport of running. And you can bet that the ripple effect of the rising tide at Central High School will eventually be felt across Grand Junction and the entire Western Slope.