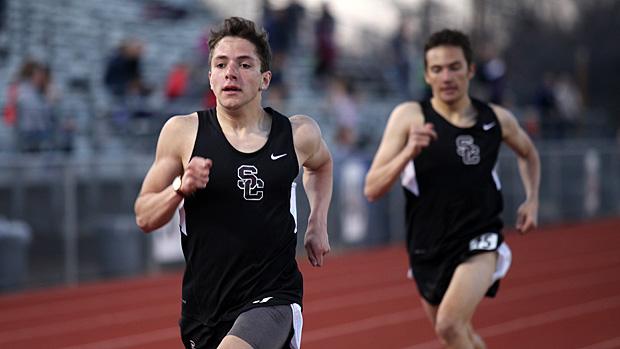 The more things change, the more they stay the same. For all the fresh new blood at several St. Vrain Valley schools track programs, Longmont and Niwot are still the serious powerhouse programs of the district.

Longmont's boys and Niwot's girls soundly turned aside all team challenges, though there were some nice bright spots individually for several other teams.

We'll start with the girls.

As if Niwot didn't have enough talent already, freshman McKenzie Fidelak stepped up and won the 100 and 100 hurdles by nearly identical margins of .33 and .32 seconds. And the first two people she beat in the 100 hurdles were teammates.

Rachel and Lauren Sharpe sniffed, sampled, chewed up, and spit out the 200 field. And that was after Rachel Sharpe had dominated the 400 and won the long jump by about an inch over teammate Alyssa Jenkins. Earlier in the day, the team of Kela Fetters, Sharpe, Sharpe, and Fidelak knocked a 1:46.04 4x200 out of the park. Alyssa Jenkins won a triple jump title at 34-8. Kela Fetters was stunningly sharp in the 300 hurdles at 46.09. Jenna McCaffrey's 5:26.49 was top-of-the-district fast in the 1600.

No team, no matter what the classification, is supposed to be this good on the second Tuesday of March. Just how good was Niwot? Try 270 points to 93 points for second-place Longmont on for size. The Cougars were, and will continue to be, simply relentless. We may need a mercy rule in 4A girls track this spring.

Silver Creek got two very nice performances out of freshmen Rylee Anderson, who won the high jump at a current state best mark of 5-3, and Abigail Gray, who won the pole vault at 10-0.

Longmont's Keely Parish did exactly what was expected of her and pinned down first place in both throws. But, the highlight for Longmont just might have been Cammy Manes winning the 800 in 2:24.24. We'll have to do some searching to find the last time Longmont won a race at a distance of 800 meters or longer in a state-qualifying meet.

For the boys, Longmont came out strong. Easily strong enough to dominate the district.

Trevor Cook, just about to board a flight for New York City, won the 100 in 11.33. Ethan Hitchcock was at mid season form or better in winning the long jump in a current state-best mark of 21-2.5 and near mid-season form winning the 300 hurdles in 41.12. Conlan Berger picked up in the triple jump where Hitchcock left off and won at 42-1. Sprint relays were all Longmont.

Skyline sophomore Braden Kram picked up his first high school win, stopping the clock on the 200 meters at 23.58. Paul Roberts went 4:30.92 to take the mile without much company. Shane Mathis kept his 3200 under 10 minutes with .53 seconds to spare.

Erie's Kyle Leahy started the season well at 6-2 in the high jump. Silver Creek kept most of the 800 meter points with a 1-2 from Bronson Thomas-Garcia and Andrew King. Mead's Tony Feula was well ahead of the 110 hurdle crowd at 15.92.

You'll hear a lot more from these schools through the remainder of the season, but next time there's a meet at Everly-Montgomery field, they'll be inviting visitors as well.