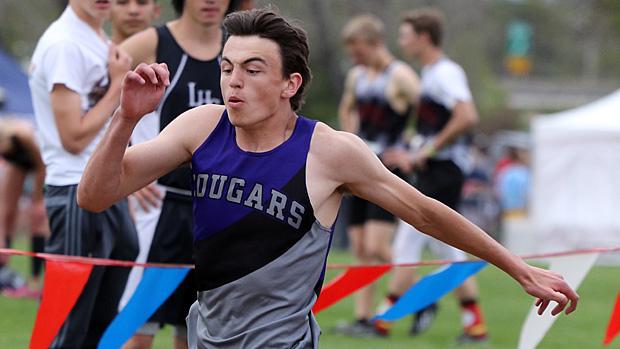 Chad Mikelson was a little torn between events today, but his triple jump results didn't suffer in the least. Photo by Alan Versaw.

If ever there was a script to keep the team title hopes of Resurrection Christian alive, today incorporated at least most of it.

Things started out very well for Lyons, but faded a little more toward gray by the end of the day. A win in the 4x800 and Owen George taking second in the pole vault at 13-9 had things looking very nice for Lyons early on, but it didn't necessarily stay that way.

Like Lyons, Cedaredge had a bit of a leaky bucket today as well. While Shane Gates posted the top time in the 110 hurdles prelims (aided, perhaps, by Ivan Mendoza coming to a near-complete stop in the middle of his flight) and Logan Cronebaugh advanced to finals, other events didn't come out so well for the Bruins. The Cedaredge 4x800 slipped to fifth. The 4x200 advanced nicely, posting the top time in prelims, but Cedaredge advanced only two each--and not in especially strong position--in the 200 and 400 prelims and only one in the 100 prelims. That much was not part of the plan.

Meanwhile, Resurrection was all over the sprint prelims. Dakota Murrow and Cooper Ward went 1-2 in the 100 prelims and 4-1 in the 200 prelims. Evan Anderson took over and posted the top time in the 400 prelims.

Resurrection, however, did fail to score in the 4x800 and had a DQ in the 4x200, a situation that could come back and cost them dearly later in the meet.

Field event titles went to Chad Mikelson in the triple jump, Cooper Daniels in the pole vault, and Garret Quintana in the discus.

For the girls, Lyons probably went through the day a little ahead of schedule and Paonia at least close to on schedule. If Paonia stays on schedule, even more or less, nobody touches them.

Marisa Edmondson advanced easily in the 100 and 200 prelims, as did Ashley Van Vleet in the 400. But a determined Lyons team did get the best of Paonia in the 4x800.

Cedaredge's girls blasted a new state meet record in the 4x200 prelims with a nifty time of 1:44.76.

The lone field event title of the day went to Kenzie Henderson of Cedaredge, winning the high jump at 5-2. Wiggins' Courtney Jenson saved her best for the last lap of the 3200 and took that title from a group who stayed in contention through the first seven laps.