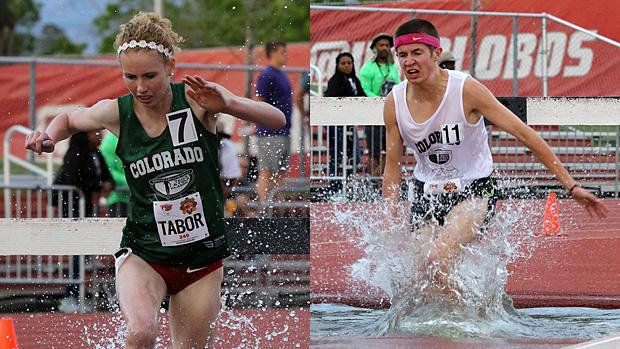 One week after steepling through Albuquerque, Tabor Scholl and Ben Butler were back to running more conventional races in Portland. Photos by Alan Versaw.

With a little fear and trepidation, I will call this the final wrap on the weekend. We've already covered the Dream Mile/100 and the Landsharks Invitational, and I think this will cover everything for Colorado high schoolers, but meets you didn't know of have a way up sneaking up on you.

The Golden West is a shadow of its former self, but still exists as a post season meet option. We had William Mayhew and Veronica Brtek registered for this one, but only Brtek ran. Mayhew, evidently, opted out of using this event as a tune-up for the big event in Seattle this weekend.

A bit to the north of the Folsom High School track in drought-parched California, a handful of Coloradoans were plying their trade at the Lewis and Clark College track in Portland.

Tabor Scholl ran two races at the Portland Track Festival, scoring a 4:27.50 in the 1500 and a 4:50.78. And, since both of those marks check in as PRs for Scholl, it appears to have been a very successful weekend for her. Like Mayhew, she returns to the Pacific Northwest this weekend. Frequent flyer miles have been piling up for Scholl, who was in Albuquerque last weekend.

Also running in Portland were Ben Butler and Tyler Scholl. Butler's 4:19.74 is a PR for the mile, and if you convert it to a 1600 time, it also counts as a PR there (by the thinnest of margins).

Tyler Scholl enjoyed the conditions in Portland enough to take 24 seconds off his Great Southwest 2000 Meter Steeplechase time with a 6:38.36 clocking. Bailey Roth, who was also at this meet, may have taken a moment or two to ponder the future of his high school steeplechase records. The younger Scholl has four years of high school remaining to chase those records.