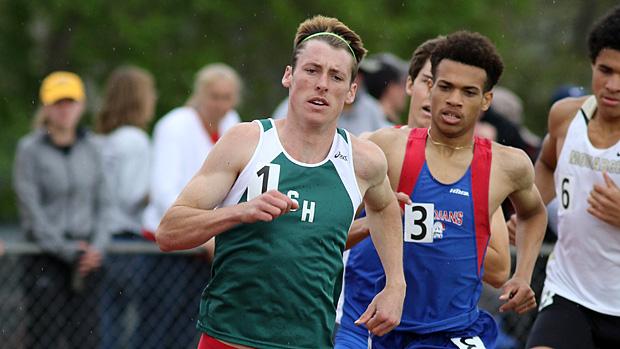 Blake Yount ran to a 5A state title and a Colorado all-time record in the 800 meters this spring. Photo by Alan Versaw.

The award, which recognizes not only outstanding athletic excellence, but also high standards of academic achievement and exemplary character demonstrated on and off the track, distinguishes Yount as Colorado’s best high school boys track & field athlete. Now a finalist for the prestigious Gatorade National Boys Track & Field Athlete of the Year award to be announced in June,

Also an ice hockey standout, Yount has maintained a 3.55 weighted GPA in the classroom. In addition to donating his time as a youth running instructor, he has worked for Aurora Youth Baseball during the summer.

“Blake set records whenever he ran this year,” said John Hancock, head coach of rival Mullen High. “His run at state was an all-time best in Colorado, and he was willing to do whatever his team needed. He really puts everything into a run. If I were a college recruiter, I’d have to have him. I coached Charlie Gruber, who was a 2004 Olympian in the mile, and Blake really reminds me of him with his mental toughness.”

Yount has signed a National Letter of Intent to compete in track and field on scholarship at the University of Oklahoma this fall.

The Gatorade Player of the Year program annually recognizes one winner in the District of Columbia and each of the 50 states that sanction high school football, girls volleyball, boys and girls cross country, boys and girls basketball, boys and girls soccer, baseball, softball, and boys and girls track & field, and awards one National Player of the Year in each sport. The selection process is administered by the Gatorade high school sports leadership team in partnership with USA TODAY High School Sports, which work with top sport-specific experts and a media advisory board of accomplished, veteran prep sports journalists to determine the state winners in each sport.