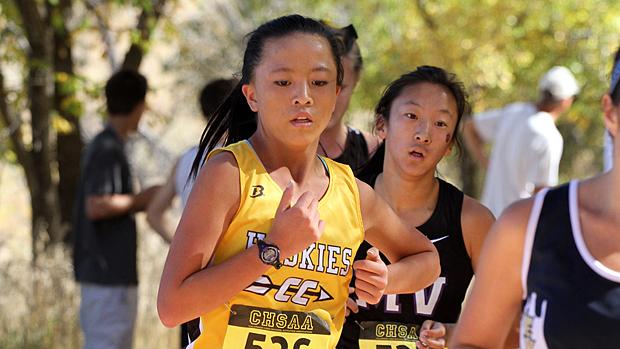 My point here is not to be critical, but to suggest that the massive success of NXR-SW for large schools just might be something that could be capitalized on for small schools as well.

We've already seen how much the boys have to offer. Let's turn our attention to the girls.

As it was with the boys, Spring Creek stands tall at the top of Nevada where small-school girls are concerned, at least while we must restrict our attention to returning runners only. Assuming Julia Mahlke is back running cross country this fall after a very limited track season in the spring, Spring Creek is the only Nevada school even remotely close to having five returning girls under six minutes for the 1600. They almost make it to five returning girls under 21 minutes for cross country as well.

Were a regional cross country championship race to happen, Spring Creek is--at least as of the time of this writing--easily your top choice to represent the Silver State.

Out on the eastern border of the state, right on the very edge of New Mexico, lies Window Rock. This spring, Window Rock picked up Annoesika Laughlin, who had previously run in New Mexico. If Laughlin runs for Window Rock again this fall, that helps to make this a very interesting team. Chamique Duboise and Hailey Talkalai were already in place as sub-20 types, now giving Window Rock a formidable front trio with enough depth to be a serious contender on the regional level.

As bright as the picture looks for Window Rock, Ganado was already there. Ganado falls in behind the lead of Daangoiina Haven. Depending on who is running cross country this fall, Ganado may or may not have a considerable 3-4 gap to deal with, but this is a capable and dangerous team nevertheless.

One more Arizona teams for which we'll keep an eye on the radar is Northland Prep. At this early point, NPA doesn't appear to have quite the same level of depth they've enjoyed in some recent years, but one or two incoming freshmen can change that picture in a hurry.

Taos was, by the end of the season, easily the top-performing small-school girls team in New Mexico last fall. And, the Tigers managed a top-ten performance at NXR-SW last fall as well (It is true Taos had someone from another school running on their NXR-SW team, but she did not figure into the team scoring, nor did she displace enough from other teams to alter team placement.). But, graduation rocked Taos hard this spring. Taos will still be a strong team--top programs tend to be that way--but there is at least one other program we need to focus on first.

Albuquerque Academy was a team that had a wheel or two come off during last year's season. The finish of their season was not what the start of their season portended. Still, as you look up and down the Chargers' returning roster, you realize very quickly this is a team with great potential. With four each of returners under 19 minutes and under 5:40 (and only one overlapping member between the two groups), Albuquerque Academy is in a position to be among the region's very best of small-school teams.

Traditional cross country powerhouse programs at Shiprock and Gallup may well be heard from this season. We don't get much of a read off their track seasons, but we also know these distance programs tend to be much more about cross country than track.

Traditionally, Colorado has been a major force to contend with in the championship race at NXR-SW. That was (slightly) muted last year, but the tradition still stands. And, if we do a little digging, we see that Colorado would hold its own well in a small-school contest at NXR-SW as well.

If we take a look at what the various Colorado small schools are bringing back, we see that Battle Mountain returns a full seven with sub-20 credentials. Both Battle Mountain and The Classical Academy return six individuals from track season who ran under six minutes for 1600 meters.

An abbreviated list of other teams rising to a level of regional concern would have to include Eaton, Salida, Kent Denver, Heritage Christian Academy, and Valor Christian. Each of these schools are at, or at least very close to, having a full five returning runners under six minutes for the 1600. Clearly, some of these teams are better than others, but none can be dismissed as without a credible case for being included in a hypothetical regional championship race. And, it's entirely possible we could make a case for a couple more schools not even listed in this crowd.

Much as was the case with the Utah boys, the Utah domination of things cross country doesn't appear to extend to the small schools.

To be sure, there is considerable talent in the Utah small-school girls programs. Millard's Anna Camp and North Summit's Sadie Sargent could run, and score, for any team in the NXR-SW championship race. What's missing, at least to date, is a team that has a solid five-deep kind of roster that goes under six minutes or under 21 minutes. Now that we've stirred the coals, though, maybe we see that as soon as this fall?

Top teams to keep an eye on (and the lists differ considerably between cross country and track) include North Summit, Millard, and Manti. Note that the cross country times shown on the virtual meet below are three-mile times, according to the usual Utah standard. Once again, teams in Utah--and perhaps especially Utah's small schools--don't often compete at 5K. As was the case with the Utah boys, I'm not aware of any current Utah small school (under 1000 enrollment) that has ever competed in the championship race at NXR-SW.

So, there you have the picture as we head into the 2015 cross country season. Doubtless a few details of that picture will change as we progress deeper into the season, but at least now you have something of a game program by which to watch at least the early developments.

And, in recognition of the quality and value of small-school cross country, we'll track things through the season. Please do keep checking back. Please feel welcome to send me notice of small school teams doing exceptionally well at the e-mail address at the bottom of this page.