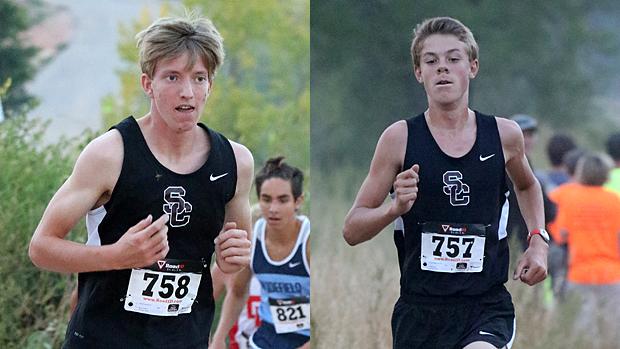 James Lee and Brock Dykema keyed a very strong opening weekend showing by Silver Creek. The Raptors get a chance to back that showing up at Saturday's Centaurus Invitational. Photos by Alan Versaw.

It's time for another weekend of start lists! I'll be posting start list links for all meets sending me start lists throughout the weekend. The links below will go to the meet pages (which generally have some useful information about the meets) and there will be links of the meet pages to the actual start lists.

I will change the number in the title of this article as start lists for additional meets are added.

Like last year, this year's version of the Ponderosa Stampede will run FR/SO and JR/SR races. The meet has allowed coaches to enter athletes in the races at their own discretion, however, so you may see the occasional sophomore running in the JR/SR race, and such. One difference from last year to this, however, will be the number of teams involved. Last year's meet of about 10 teams has swelled into about 18 teams for this year. And, there are some large and powerful programs on that list. In fact, SkyView Academy and Ridge View Academy are the only non-4A/5A teams coming to the meet.

The Arapahoe Warrior is down a little from last year, but definitely not out. Top programs like Air Academy, Cherry Creek, Cherokee Trail, Palmer Ridge, Rock Canyon, Mountain Vista, and many more dot the list of teams. Plus, we get our first looks at Salida, Steamboat Springs, and Arapahoe on the new season. If you're a big-time, no compromise ever, fan of cross country, you could consider taking this one in along with Centaurus on Saturday. By then, you would have seen an overwhelming majority of the top teams in the state.

This meet has seen bigger editions, but it's still a full-sized meet taking place later today at Confluence Park. Grand Junction, Central, and Montrose represent the Western Slope's larger schools, but it's a solid slate of 3A-and-under teams that really helps to fill out this meet. After a big weekend in Colorado Springs a week ago, we'll get to see how Telluride fares against more local competition.

After a slow start last year, this meet attracts 21 teams this year, included among them a few of the best teams in the state in their respective classifications. We get our first look at a very solid Fairview program at this meet. Rachel and Rebekah Rairdon, who sat out last week, are listed among the entries. This one should be a nice early-season test for a lot of programs.

Normally, I probably wouldn't post college start lists, but with this being a combined high school/college meet with a lot of former Colorado high schoolers in the field, I thought there might be more than the usual interest in these start lists. I kind of wish I was going to be there myself as there seems to be an unusual number of athletes from our high school program running at this meet. As a note, it appears the first and last names of the Wyoming entries got somehow jumbled in the entry process. I'm pretty sure they can get the bibs sorted out, though.

Make no mistake. This is the biggest meet of the weekend, and likely the one that will have the greatest overall impact on the rankings. We get our first glimpse at the much-anticipated 2015 edition of the Peak to Peak girls. Also rounding out a very strong field will be Monarch, Boulder, Rampart, Silver Creek, Rocky Mountain, Legend, Broomfield, Centaurus, and many more. I regret to announce that Ben Hershelman will be unable to write the coverage for this meet as previously announced, but I promise there will be coverage coming from this meet.

With the shuffling of this year's schedule, Centaurus got out from under the shadow of being on the same weekend as the St. Vrain Invitational, and this meet has quickly emerged as arguably the most competitive meet of the weekend.

After taking on a strong field at the Cheyenne Mountain Stampede last week, Widefield hosts Vanguard this week. The Coursers are not to be taken lightly. It seems likely that Canon City and Fountain-Fort Carson will square off for top honors among the girls teams assembled. In all, 11 teams make their way to Widefield Community Park on Saturday morning. That might prove a little cooler than some of the afternoon meets here have been.