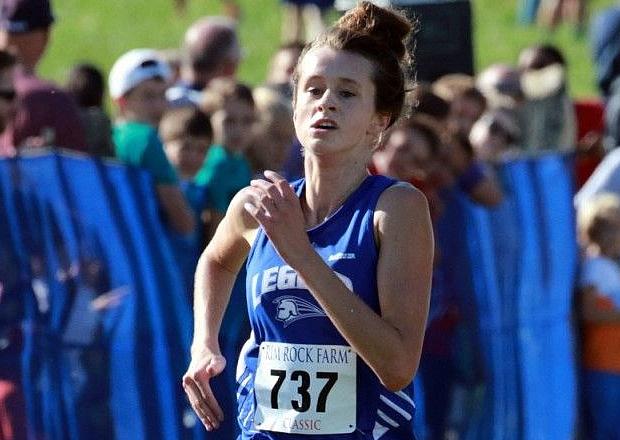 You definitely wanted a program this weekend if it was your intention to follow all of the out-of-state cross country action this weekend. It seems this was the weekend to get out of town and go somewhere else to race.

At the Rim Rock Classic in Kansas, Colorado was represented by Legend, Pine Creek, and Paul Roberts.

Although the team results were a little subdued for Colorado at Rim Rock, the individual results were anything but. Catherine Liggett dominated the girls Gold race, winning in 18:08 to post the fastest time of the race by a little better than 15 seconds.

Moments later, Paul Roberts was taking over the leading from a plodding (at least by Mr. Roberts' standards) pace and racing to a 29-second margin margin of victory at blistering Rim Rock time of 15:10.9.

Legend's boys, led by Scott Johnson in 24th, would take seventh in the Gold race; their girls would finish in 31st. Top Colorado honors in the Gold race went to Pine Creek's girls in 12th. Devon Kroeker paced that effort with an 11th-place individual finish.

Traveling westward, Palmer Ridge ran into an unexpectedly rough go of it at Bob Firman in Idaho. Both boys and girls were relegated to 12th-place finishes in a brutally tough field for the Elite races. Andrew Rudnicki and Hannah Capek had the top finishes for Palmer Ridge, but both were a big space back from the leaders.

The usual tight Palmer Ridge scoring pack of boys was spread out over 56 seconds, dashing any hopes of an upper echelon finish for this team.

In Palo Alto, California, Peak to Peak was taking on schools their own size and faring very nicely. A 2-5 finish from Quinn McConnell and Anna Shults in the Division 4 race got things pointed in the right direction, and the Pumas rode that start to a third-place finish, but only five points out of first.

It was a sterner test for the Peak to Peak boys, who finished 31st in the same division.

And, finally, we travel to Portland, Oregon, for the Nike Portland XC Invite (formerly known as Nike Pre Nationals). There, Cherry Creek took on some of the top teams in the nation, finishing second to Sunset and ahead of Camas in the girls race.

Devon Peterson and Lillian Markusch posted top-ten finishes for the Bruins, both a little over 18 minutes. The Cherry Creek boys did not figure into the team scoring, by Kyle Moran did run to a 16th-place finish in the championship race.

In the biggest travel date of the weekend, Castle View traveled all the way to Rhode Island to compete in the Ocean State Invitational. The CV boys finished 12 in the Division 2 race. Savanna Dalton took 11th in the Championship race, with the Castle View girls settling into 10th in the same race.