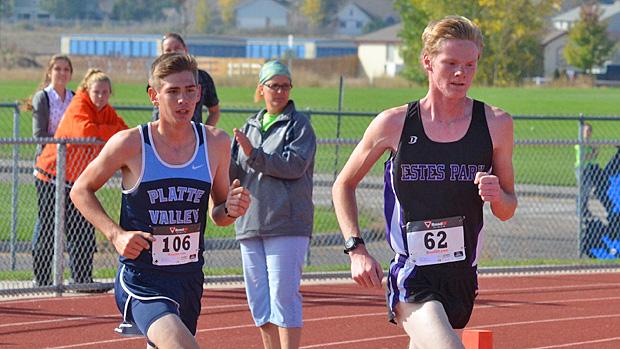 The boys individual title was still very much in doubt when Dylan Zurfluh and Andrew King entered the stadium for the finish. Photos by Ron Eberhard.

For most, it was more or less a foregone conclusion that the Patriot League boys crown would end up in Frontier Academy's hands--at least if Frontier Academy ran anything like their regular varsity roster.

What was not nearly as clear was which team would prevail in the girls race. Certainly, Frontier Academy was a candidate, but so also were Estes Park, Eaton, and Brush. 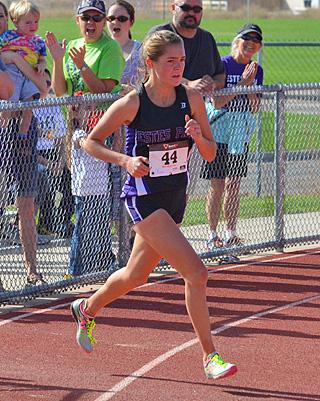 Lily Tomasula-Martin's individual crown was at least as much taken for granted as the Frontier boys crown, and Tomasula-Martin did nothing to disappoint, finishing in 18:46 and 89 seconds ahead of second place. And on the strength of that effort, the early advantage in the team scoring went to Estes Park.

If only Estes Park had thought to ask in advance for scoring by average time...

Similarly, nothing much was surprising about Emma Willadsen and Jessica Peters occupying the second and third-place finishing positions. Through three places, the Patriot League girls team race was playing out very much according to expectations.

It was at fourth place that Frontier Academy started to play their hand. Hannah Ellis nailed down fourth, and Taylin Forkner followed soon after in sixth. By place 16, Jennifer Bowles had wrapped up the Wolverines' team scoring. Their 49 points would prevail over an Eaton team that beat Frontier Academy at every scoring position until #5, proving anew the importance of the fifth runner.

Although Frontier Academy ranked as a prohibitive boys favorite going into the meet, the way they ended up winning it left the eventual outcome very much in doubt. And, Brett Shanklin does have a history of resting his top individuals for the league meet.

This time, despite leaving their top three runners in civvies on race day, Frontier Academy was still able to control the outcome of the Patriot League boys title by cramming all five scoring runners into a span of 10 places near the top of the order. Dhalton Akey took over team leader duties and finished his race in sixth place. Chukwuzulum Nwizu came next in 11th, while the remaining three FA scorers arrived within the next four places.

The large early advantage Estes Park earned on its top three finishers evaporated quickly, with Frontier Academy stealing away the title. The final tally read 59 points for FA to 61 for Estes Park.

The individual crown went to Dylan Zurfluh of Estes Park in 17:13, giving the Bobcats a sweep of the individual titles and Zurfluh a one-second margin over hometown favorite Andrew King of Platte Valley. Better than half a minute would pass before Sterling's Isaac Bernatchez would cross in third place.