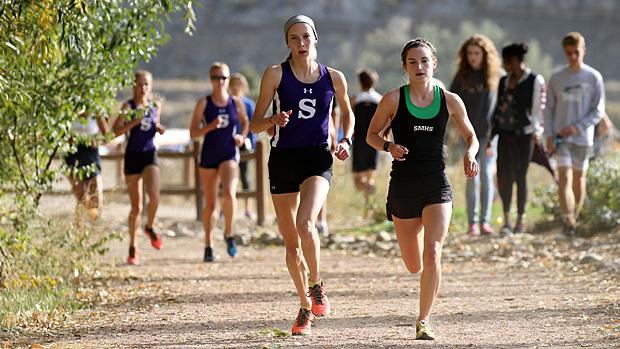 Taryn Ceglowski and Hannah McReavy had a great battle for first as long as it lasted. Photos by Alan Versaw.

People love to root for the underdog. But, doing so didn't do any good Friday at the Tri-Peaks/Black Forest League meet.

Exactly as expected and precisely on cue, the Lamar boys, Salida girls, and both Peyton teams dominated their combined league meets at Pathfinder Park in Florence.

Historically, Pathfinder Park has had some way-too-hot days in October where runners wilted a little under the conditions, but this was not one of those days. It may have felt unpleasantly warm except for a steady breeze that added just a hint of chill to the afternoon. 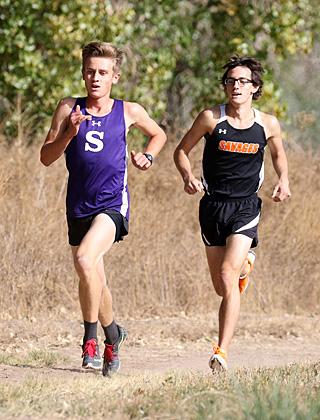 The boys race suffered the indignity of a restart, but at least it was the kind of restart where barely anyone had gone 10 meters before the starter's pistol echoed a recall. At that point, nobody was even close to having used up their seven free seconds of energy.

And, on the restart, it took very little time for Taylor Stack and a small crowd of Lamar harriers to move to the front. By the half mile, that group had narrowed down to Taylor Stack and Jake Rogers. And, it would stay that way through two miles and a little beyond as the two lead runners only increased their gap on the field.

But, in the final mile, Taylor Stack's legs kept turning over after a fashion Rogers was no longer about to match. The gap at the end was impressive, 15:33 for Stack to 16:08 for Rogers.

Behind Stack and Rogers the tale of the team title was quickly told. Kaleb Crum and Blake Rogers ran only a short distance behind Rogers.

The entire scoring five of Vanguard, led by promising sophomore Nick Lovato, managed to pass by before Lamar got their fifth across, but Lamar's fifth came right on the heels of Vanguard's #5, so there was no time to ponder to possibility of an upset. The scoring likely would not have been as close as it was had Lamar not been down a couple of runners. 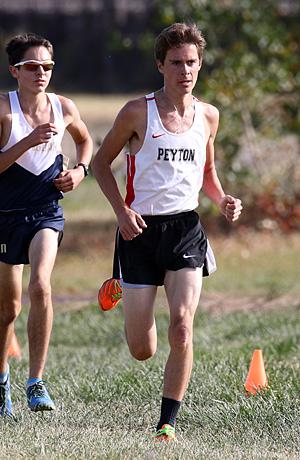 Salida, too, was down a couple of the usuals and never really factored into the team scoring contest.

Meanwhile, Peyton was manhandling the 2A crowd. Although I've not yet seen official results, but my mental notes from close to the finish had Peyton with three across before any other 2A finisher, plus five of the top six. Garhett Shaw (photo, left) led the charge for Peyton, as he has done all season.

There never was so much as a hint of doubt about the Tri-Peaks girls outcome.

As Hannah McReavy and Taryn Ceglowski waged a prolonged battle for first place, the Salida trio of Cecilia Kastner, Phoebe Powell, and Sydney Fesenmeyer simply dropped the rest of the chase pack. The trio could have run with arms locked for the first three miles, but no evidence of that happening was seen on the course.

Eventually, Hannah McReavy would wear down the will of Taryn Ceglowski and go on to claim a margin of victory close to the size earned by Taylor Stack, but the next four places all wore Salida purple.

And, in the final analysis, I'm not at all certain Salida actually needed any of those four places to claim the team title. In any case, Bari Beasley and Olivia Lowe had the front four nicely backed up in seventh and eighth places. Only Vanguard's Jenny Smith broke up the continuity of Salida's first six runners.

My mental notes, subject to human failing as they are, don't quite have Peyton perfect scoring the Black Forest girls field, but neither was there much in the way of doubt regarding the outcome. Since the departure of Vanguard to 3A pastures, Peyton has exercised undisputed ownership over this chunk of real estate.

As a sidebar, we note that a sharp set of new uniforms has arrived at The Vanguard school. Evidently, the school's nickname for itself is "Van." At least that's what the new shorts say.