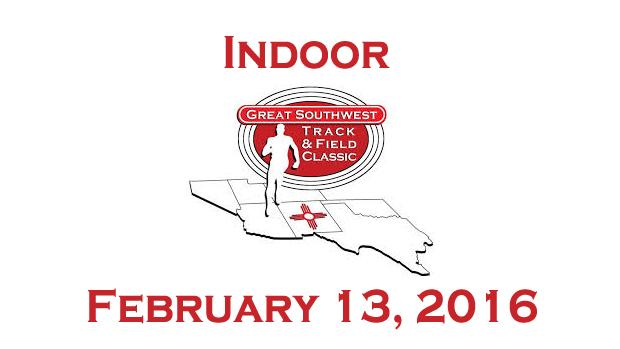 It's the showcase event of the indoor season for New Mexico--and beyond!

2016 is year five of the Great Southwest Classic Indoor. And, make no mistake, this figures to be the best edition of the meet to date. The drawing power of the summer outdoor version of the meet is starting to rub off on the winter indoor version in a big way.

Talent is spread wide and deep across most of the events, and it's definitely worth noting some of the top-tier national athletes pointed at Albuquerque for this weekend.

Top of the list of those athletes is Louisiana's Armand Duplantis. Only a sophomore, Duplantis owns the national freshman class record in the pole vault and is already over 18 feet this indoor season. Needless to say, it will be a special treat for all to see the Duplantis show on Saturday evening. 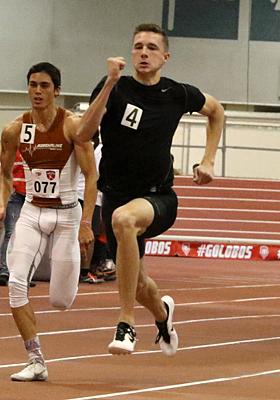 But, Duplantis is just one of many nationally-ranked athletes showing up on the entry list.

Last year's meet male MVP, Norman Grimes out of Texas (photo, right, by Alan Versaw), returns for an encore performance. Though Grimes has not yet participated in a formal way in this year's indoor season, he finished last season ranked #9 nationally in both the 200 and 400, and ranked #5 in the 60 hurdles. If a common surname means anything, it could be that Grimes has a younger sister competing in this meet as well, evidently in the 60H and 400.

Also from Texas, Jalen Seals enters the meet ranked #11 nationally in the long jump and #19 in the triple jump.

Colorado's Emily Sloan will headline the girls 60 hurdles, fresh off a meet-record performance at the Air Force High School Indoor Open of 8.42. That same 8.42 has her sitting at #5 in the national rankings.

If you go as deep as national top-50 rankings, this meet is simply spilling over in such entries. And, since the banked Mondo makes everyone a little bit faster, expect a few more national rankings on the other side of this meet!

And, we may see a few more high-level entries stepping into the fray before registration closes at 10 PM on Friday evening. If so, an already-great meet just gets better. No entries will be accepted after 10 PM MST on Friday.

At this time, the meet is very heavy in Texas and Colorado entries. While there are some notable New Mexico entries, athletes from the Land of Enchantment have to deal with this meet taking up one of their allowable meets for the spring if they compete here. A scattering of athletes represent other states.

Colorado Track XC will be on-hand for coverage of the meet, including both photos and video.

All details of schedule, entry fees, online registration, admission prices, and such can be found on the official meet page by clicking on Indoor Classic.

Update, 02/11/2016, 7:00 AM: A couple of very solid local (New Mexico) entries have recently added to the boys field. Expect to see Steven Duran running the 800 and Devin Paredes running the mile. Another notable addition comes from Arkansas--Bailee McCorkle in the pole vault. McCorkle checks in with a current national #13 ranking in the event.

Update, 02/12/2016, 7:00 AM: The girls pole vault got stronger still with the addition of US #1 Andrea Willis, plus her younger sister, and Colorado #3, Erika Willis. This means the meet will have US #1 pole vaulters in both genders, and each of Colorado's top three girls. In general, the pole vault has simply gone to a whole new bar as Arkansas state champion Dillon McBride and Max Manson, the US #1 freshman, have recently augmented the boys field. Also added onto the list of meet entries is New Mexico's own Alejandro Goldston, winner of the 200 and long jump at last weekend's Air Force High School Indoor Open. The top heat of the boys 200 is beginning to look simply sensational with a nice representation from each of Colorado, Texas, and New Mexico. Also from New Mexico, Michael Tenorio joins the mile field. Allyson Arellano, last year's runner-up in the 3200, has joined this year's field as well. Today is the final day of entries for the meet, so there is a strong possibility we will see more exciting additions today.