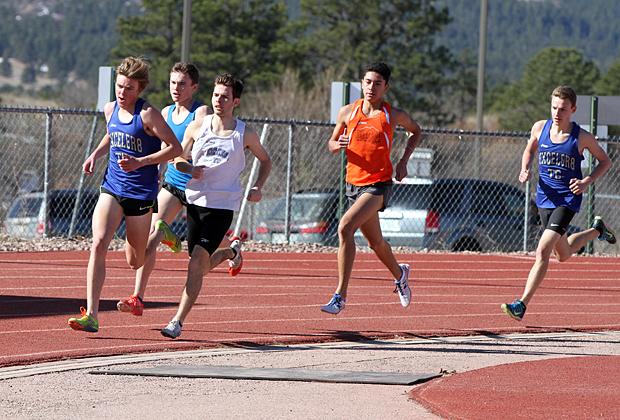 Coming off of the fourth turn of the 1000, Luc Hagen had the lead, but the real racing was just beginning. Photo by Alan Versaw.

The Polar Bears were there alright. It's just that they were camped out under the umbrellas, sipping ice-cold beverages.

More than one coach felt the warmth and day and remarked, "We probably won't have meet weather this good again until deep into April."

All in all, it was a very comfortable day for a track meet. In fact, it was nice enough this meet really could have taken in a few sprint, hurdle, and jumping events. But, maybe next year...

And, the competition on the track wasn't bad either.

The 1000s provided the deepest competition of the day. Hannah Capek of Palmer Ridge dispatched with the girls 1000 field with an eight-second margin of victory at 3:20.1. The race wasn't nearly a lap old before Capek had cleared the competition and started to pad her lead.

The boys race took much longer to sort out. Andrew Rudnicki took the lead around the second turn, but the field was still tightly packed. Luc Hagen had the lead through turn 4, but it was all Tanner Norman after about midway through the final back straight. Norman's winning time clocked in at 2:42.2. A total of seven runners kept their times below 2:50.

A bit-too-fast of an early pace washed the starch out of the 2000 runners (and, honestly, a big part of the selling point of this meet was getting the feel of smart racing back), and it was Peyton's Quinten Harris who held on best--taking the win in 6:37.8. 8th grader Noah Trautner made a very strong showing for second in 6:41.3, just half a step ahead of Cole Munoz.

The throws had a few moments of their own. Conor Bertles won both on the boys side with heaves of 156-6 and 44-6 (the TCA shot put sector has a slight uphill grade that proved to have a bit of an annoyance factor for the day). The best girls throw of the day belonged to CassieLynn Bonner, with a winning discus throw of 90 feet even. Obviously, not very many folks have had much opportunity yet to sharpen their technique with the platter.

The day ended with the DMRs. The Cheyenne Mountain Running Club ran a pure school team in the boys DMR and took the event with a surprisingly nice time of 11:10.2. Thomas Staines and James Jones took the two longest legs. Had they been pushed, they likely could have clocked an even faster effort. For the girls, a mixed team of TCA and Air Academy cross country types took the win in 13:48.1.

All told, the meet was an unqualified success for a first effort and likely comes back as a two or three meet series (always dependent on the weather and a clear track, of course) next winter. It is even conceivable to add a few events next year.

And, a huge shout out to Kelly Christensen and Larry Rudnicki, who served as the timing crew, and to all others who stepped up in ways big and little to make this meet happen in an efficient sort of way!