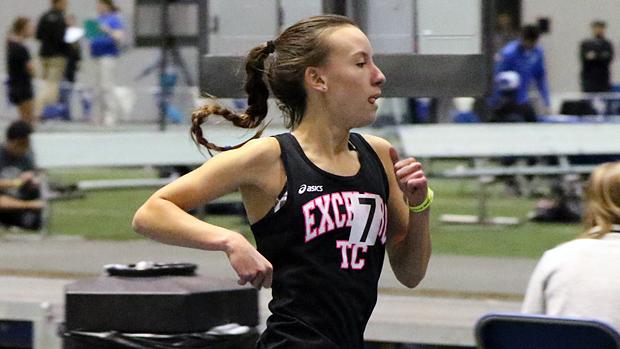 Hannah Capek continues the ambitious pace of her 2016 schedule with an appearance at the Chandler Rotary Invitational this Saturday. Photo by Alan Versaw.

We are now approaching the second weekend of the outdoor season. It would appear to be a slightly larger weekend, in terms of participation, than opening weekend, but still far from the kind of all-hands-on-deck participation we see on most April weekends.

Very few 1A and 2A teams were in action last weekend. In fact, it would appear that Shining Mountain Waldorf was the only 1A team in action last weekend, and they were only there in very small numbers. Historically, basketball is a bigger conflict with track for smaller schools (there are at least a couple of different reasons for this), and the season is slower to ramp up for these schools.

Still, basketball season is now finished, and we can expect a little higher level of participation this week from the state's smallest schools.

Taking a bite out of participation on the other end is the fact that spring break begins this weekend for a fairly large chunk of Colorado's high schools. While that doesn't necessarily mean that teams shut down operations altogether, it does mean that several teams will be working with less than fully-loaded rosters.

And, this weekend also provides an attractive little bit of out-of-state competition for Colorado's athletes in the form of the Chandler Rotary Invitational in Arizona. I probably haven't picked up on all the teams sending delegations, whether large or small, to Chandler, but I have noticed entries from each of the following schools: Highlands Ranch, Rampart, The Classical Academy, Air Academy, Montezuma-Cortez, Palmer Ridge, and Cheyenne Mountain. Teams from California, Nevada, Utah, Texas, and New Mexico will also be converging on this meet as well.

There's also an excellent chance one or two Colorado teams will be putting in appearances at the California Relays as well, though I've not yet seen any entry lists for that meet.

More locally, there three rankings meets scheduled around the state for Friday and another another 10 for Saturday.

Delta and Rifle get rankings competition underway on the Western Slope. Center gets things started in the San Luis Valley. And, there are meet options all up and down the Front Range, plus as far out on the plains as Weld Central and Brush for this weekend.

Small schools should be showing up in substantial numbers at Rifle, Delta, Center, Brush, Pueblo Centennial, and Windsor. Other meets will, of course, see some small-school entries, but probably proportionately less than the aforementioned meets.

It's an open question of how many of last week's NBNI participants will be in action this weekend, but we do have word that Katie Rainsberger will be running the 800 at Chandler Rotary.

A championship, of sorts, will be contested for City of Aurora bragging rights at the Stutler Bowl (which, incidentally, is not in Aurora--making this a kind of neutral site championship). I'm certain some civic pride attaches to winning this thing, but I have to imagine the "City of Aurora" part is also a lot about limiting the number of teams eligible for entry.

The ultimate limited team entry meet of the weekend, however, would appear to be the LPS Spring Break Duals. This one sits as six teams (Arapahoe, Bear Creek, Heritage, Littleton, Mountain Vista, and Wheat Ridge). But, there's enough firepower in those six schools to make for a very competitive meet that also allows coaches to pull athletes from well down their depth charts.

By my reckoning, the ThunderRidge meet at Sports Authority Stadium appears to be shaping up as the biggest meet of the weekend. At this point, they are at 20 schools entered, with all of those schools figuring as robust 4A or 5A programs. Pueblo Centennial is currently at 24 teams, but with many of those being relatively small programs. Rifle is also currently sitting at 24 teams, but, again, many of those are fairly small programs.

If weather becomes a factor this weekend--which remains a good possibility--those teams that scheduled meets in warmer locations will be feeling affirmed for those scheduling decisions.