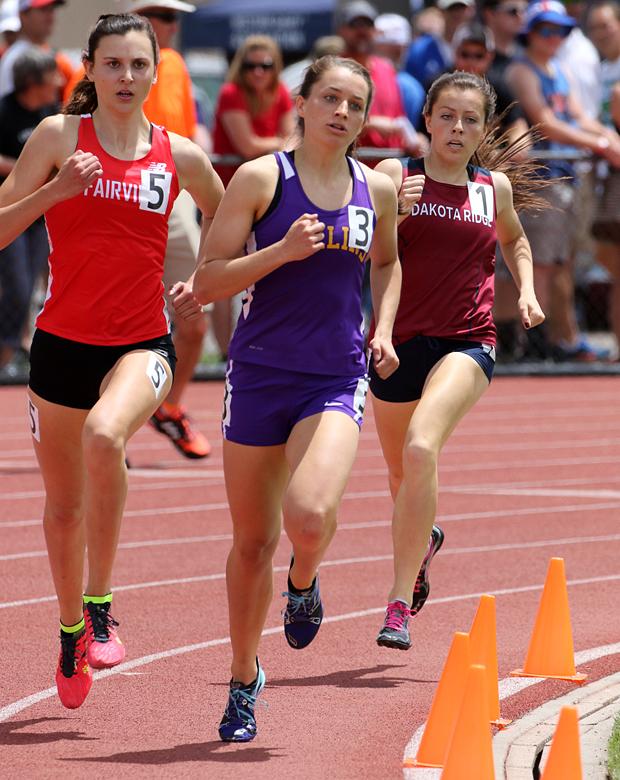 If you had known in advance the adversity the Fort Collins girls track team would face in the 2016 Colorado State Track and Field meet, you wouldn't have given them a prayer. Or, perhaps a prayer is exactly what you would have given them.

In any case, this one ends up as one of the great stories we've seen in a long time. We noted in Friday's summary article that Audra Koopman was clearly hobbled in the high jump. She had yanked a hamstring a few strides from the end of the 4x100 that morning and was busy squeezing out what little cooperation the hamstring would still afford her in the high jump. Koopman's Saturday was a standing start in the 100, followed by limping down the straight for ninth place and one point.

And that only seemed to galvanize Conrad Crist's forces.

Lauren Gregory, who has spent a long spring cycle of injury and recovery, fought gamely to score points in three events that most, before the season, would have figured to win. Real competitors can't stand to give up and Gregory wasn't about to throw in the towel. With that spotlight fixed on others at the front, Gregory fought to an 11th in the 800, third and seven points in the 1600, and seventh and three points in the 3200.

Gregory did her part.

Becca Schulte found breadth enough in her own shoulders wide enough to carry an enormous portion of the load. Schulte's win in Friday's 800 was an enormous lift to a team that had to be wondering where the next blow was coming from. Schulte fought gamely to sixth place in the 400 finals--that's all a 54.58 gets you these days, apparently. A fresher Schulte probably would have found more, but, again, this is a story of the overburdened and fatigued and not a story of the primed and fresh. Schulte's 24.62 earned a fourth in the 200.

Jasmine Chesson got an eighth in the 200 and a seventh in the 400. Perhaps more importantly, she was the glue that held a couple of relays together. Emma Dern's third in the shot put was enormous.

Thursday's early points in the long jump from Koopman and Kailey Paterson loomed large, as did the discus points from Kelly Ervin and Dern.

By the time a Koopman-less 4x100 nailed down a fifth place, the deal was sealed. Freshman Isabel Layne became a part of Fort Collins track and field folklore when she stepped in for Koopman on that relay. When Chesson and Schulte stepped to the track to help pace the 4x400 to a second-place finish of 3:57.67, it was just so much icing on the cake. Those eight points yielded a final tally of 81 points, more than enough to keep Arapahoe and Cherokee Trail at bay 69 and 68 points, respectively.

The future may or may not belong to the Fort Collins girls. Save for Ervin and Schulte, the individual points posted by this team figure to be back next year. But the magic that created this year's state title doesn't show up by appointment. Like Gandalf, it has a mind of its own about when and where it shows up. 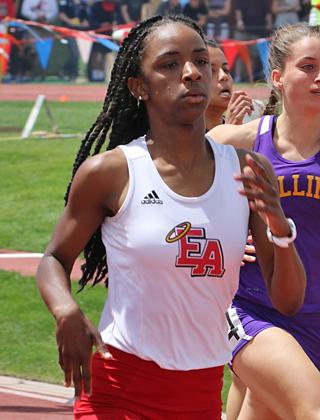 The future, however, should be full of much to await in eager expectation.

Arria Minor (photo, left) is one reason to be excited about what the future of Colorado girls track and field holds. Minor ran 11.83 (-1.8), 23.53 (-2.5), and 52.50 to sweep the sprint events. None of those marks were state meet records, but each of those marks should be cause of considerable concern for the existing records. Perhaps especially so for Ana Holland's record of 52.49 in the 400.

In case you were wondering, Minor is the top-ranked freshman girl in the nation in each of those three events.

Brie Oakley, though a junior at Grandview, had a big first state track and field meet of her own. Oakley dominated Thursday's 3200 with a new 5A state meet record of 10:33.16. That record, of course, came at the expense of Melody Fairchild's grip on the record book. Oakley ran in Friday's 800, but to little avail.

On Saturday, however, Oakley came back breathing fire. Toward the end of lap three Oakley and Megan Mooney got legs tangled at the front of the field and Oakley went down to the track--hard. For the next 40 seconds or so, Oakley looked a little dazed, and it appeared she would be content to take second.

Then Oakley had a phoenix moment of her own. Sensing that Mooney was catchable--or perhaps determined simply to put up whatever fight she get in the remaining seconds--Oakley charged and came oh-so-close to catching Mooney at the finish line. The timing crew was 100% on top of the situation. The results board flashed and immediate "Results Pending Official Review" image as meet officials gathered to confer over the situation.

In the end, Mooney was disqualified for interference and Oakley's 4:58.47 stood as the winning time. 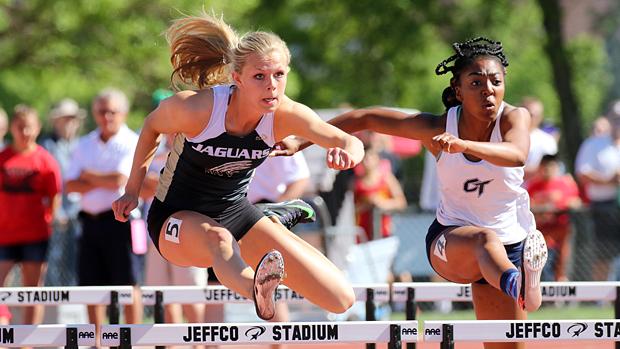 Revisiting the topic of records that should be reviewing rates on life insurance, the hurdle records of Dior Hall and Carly Lester might be well advised to look into exactly that. Emily Sloan dominated both hurdle events with winning times of 13.46 (-0.4) and 41.24. The latter is a mere .06 off of Lester's existing record, and the 300s seem to be something a novelty for Sloan. She's still in single digits of recorded efforts in that event.

In the face of stiff competition in the 200 and 400, Arapahoe's Julia Hall had to take her first-place finishes in relays. Arapahoe prevailed in the 4x400 and SMR8 and had to settle for seconds with a 24.36 (-2.5) and 53.35. Here's guessing the University of Michigan is delighted to try to find a way to work with those times.