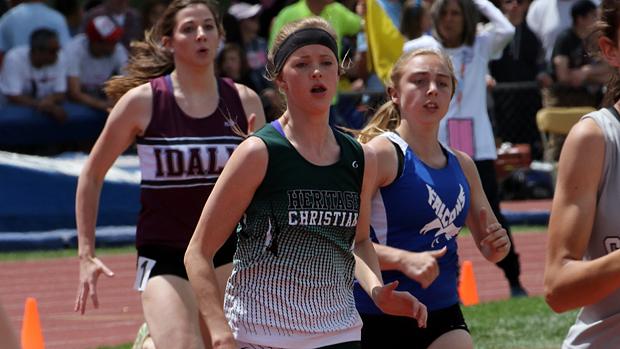 Annie Weaver was part of a long list of names that helped pile up 121 points for Heritage Christian Academy over the weekend. Photo by Alan Versaw.

This weekend, there were three state titles won by Fort Collins teams. But, only one of those teams possibly qualifies as angry birds. The Eagles of Heritage Christian Academy--or at least several of the team members--have had a long time to think about the state cross country championship that got away from them on the 498th anniversary of Martin Luther nailing his 95 Theses to the door of the church at Wittenberg.

If there is absolution to be found in numbers, there were plenty of numbers to be had at this weekend's state meet. To be more precise, Heritage Christian Academy put up a crushing 121 points to 69.5 for second-place Springfield.

And that was even with Rachel Rairdon hobbled for the final day of the state meet (an unfortunate circumstance for the senior who nevertheless goes out as one of 1A's best-ever athletes), a scenario which likely cost HCA at least another 15 points.

The only events the Eagles missed scoring in were the 100 hurdles (no entries), the 4x400 (a DQ), the high jump, pole vault, and triple jump (each no entries). Otherwise, it was a continuous stream of points, and way more points than any other team in the field was capable of dealing with.

Annie Weaver and Kaitlyn Pallotto did the damage in the sprints. Pallotto also joined in the 300 hurdles fun, as did Weaver in the long jump. Alyson Ziegler snared places in both throws. Five more joined the relay festivities. 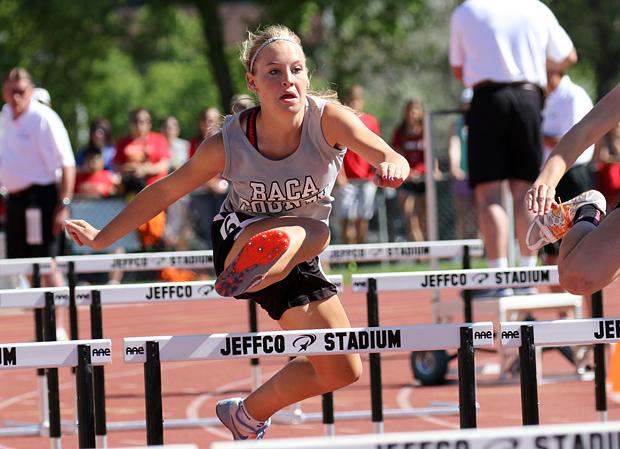 From the same general corner of the state, Baca County's Bree-Ann Carwin, Ciarra Tate (photo, above), and D'Lanee Doyle took wins in the 800, 100 hurdles, and high jump respectively. Carwin checked over her shoulder a time or two in the 800, but she saw exactly what the crowd ringing the track saw--nobody close.

Still more from that corner of the state--Springfield's Tatelyn Lasley won the 400, edging Carwin at the finish in that event, and Granada's Kylee Holden captured the 300 hurdles.

Sangre de Cristo's senior tandem of Sarah Storey and Jenna McKinley won four event titles and scored three new meet records between them. Suffice it to say that S de C girls track figures to be in something of a rebuilding year in 2017.

Antonya Schaffert won the pole vault at 9-10 and also took second in the high jump, except five feet lower.