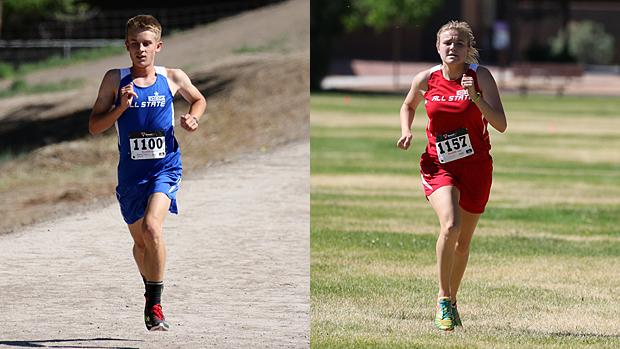 There was not a lot of swapping out of the leads in today's third running of the CHSCA All-State Cross Country race in Alamosa.

As a matter of fact, both Taylor Stack and Cori Small were either in the lead or sharing the lead for the entire 5K of the race.

We've seen Taylor Stack win before. We've seen that over and over again. This was, however, only the second cross country meet title over the course of Small's career. Some things stay the same, and some things do not.

Stack bested a field of 14 male competitors with a time of 16:27, 35 seconds ahead of second place. Kaleb Crum and Ro Paschal rounded out the top three.

Small topped a field of eight female competitors with a time of 20:25. It would be nearly 50 seconds before Sydney Fesenmeyer finished in second. Makayla Garcia finished third to give the San Luis Valley its only top-three finish in the race.

Although the pressure of state track and field was definitely off for this event, there were nevertheless a couple of individuals who finished on empty, as the saying goes.