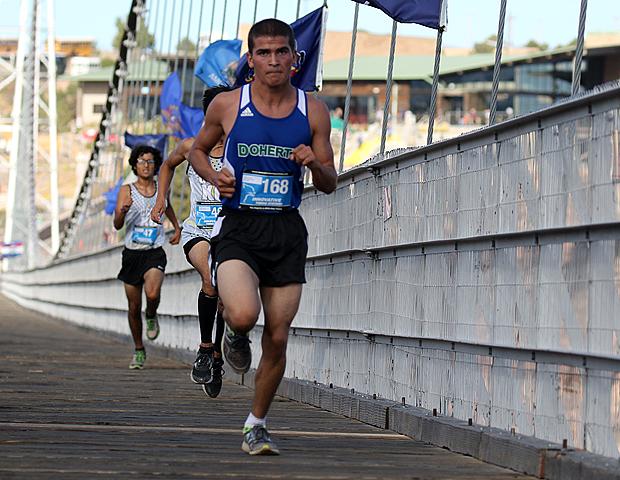 Jozighus starts building the Doherty lead with a 6th-place finish.

As courses go, the Royal Gorge course is not a slow course. Neither does it compare to Liberty Bell or Anna Banana. If you hold your pacing carefully enough on the outgoing 1.3 miles, there should be plenty left in the tank for a blazing finish. And the final push across the bridge is, frankly, rather exhilarating.

Just ask Thomas Chaston and Hayden Martinez, who battled hammer and tongs all the way across the expanse of the bridge before settling to a finish in alphabetical order by surname. Martinez never let Chaston away, but Chaston never let Martinez in front. At the end, Chaston's 16:20 had less than a second of margin on his Doherty rival.

For Martinez, though, reinforcements were on their way--and in a big way.

Jozighus Thomas took sixth in 16:59. Jordan Miller and Daniels Skinner and Duensing quickly closed out the Doherty scoring in under 18 minutes.

Doherty's 52 points were 40 better than what visiting Garden City (Kansas) could manage for second. And, Garden City had the advantage of a spare runner in the field. Next best from Colorado was Cheyenne Mountain's 98.