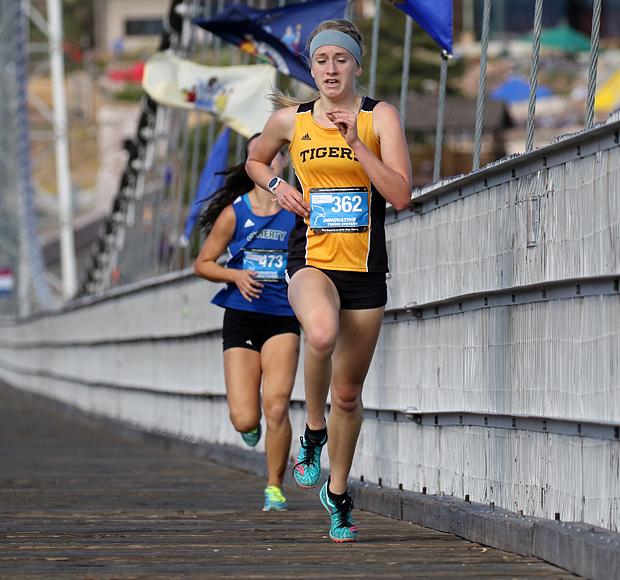 Ellie Enderle digs deep to hold off the challenge of Kayli Tabares, but Doherty gets the last laugh.

The truth of the matter is that I don't know who stepped onto the bridge in the lead. In any case, nothing was settled when Ellie Enderle and Kayli Tabares hit the north end of the bridge. It would take a nearly a quarter mile of breathless racing to settle the matter, but eventually Enderle would pull away for a 19:22 and a winning margin of a little more than two seconds.

All that to prove the truth of the maxim: Never get involved in a running war at the Royal Gorge with the home team.

For Enderle, it was only the second cross country title of her storied high school career. Track titles have been a bit more plentiful, but Enderle's win in front of the home crowd doubled her career total in cross country.

Once again, though, Doherty bounced back from losing the individual title with a rousing team title.

After Tabares came freshman Mikayla Cox in 6th (sound familiar?), Rachel Blizzard in 14th, the younger Tabares in 29th, and Esther Clement in 38th. Despite her name, no Clement did not come offering clemency. It was game over with 81 points when Clement crossed the finish line at 22:25.

Homestanding Canon City missed the team title by nine points, and Cheyenne Mountain by another 11.