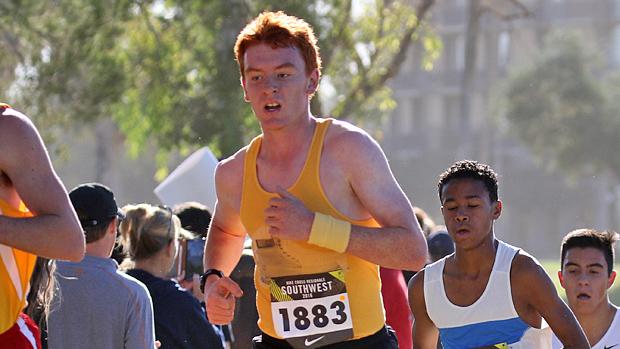 For those who figured out who he was in time to appreciate it, Camden Gillis put on quite a show on Saturday morning. Photo by Alan Versaw.

Depending on your perspective, plenty was learned at NXR-SW 2016. One thing that was learned was just how devastating a hot, dusty, windy day can be to dreams of running a PR to close out your season. A few PRs were had, but most Colorado runners came up well short.

I was much more hoping to drive at what sorts of things did we learn about Colorado athletes and teams that wasn't readily apparent during the season. I'll list a few out here.

Easton Allred - If you didn't believe Allred was for real after he won the USATF-Colorado Junior Olympic race, you should be convinced now. Running under the banner of the RCXC (Rock Canyon) club, Allred won the large school open race with a time of 16:07. That would have won him top freshman time of the day honors except that he evidently signed up without putting down a grade in school. Results have an asterisk in the grade column. At some point and at your leisure, you might want to check out the Rock Canyon freshman class for this season.

Mauren Fitzsimmons - Welcome back, Mauren. And what a timely first performance of the season to help boost your Mountain View team to the NXR-SW title and an all-expense paid trip to Portland! It would appear Ms. Fitzsimmons bounces back rather nicely from injury.

Adugna Moritz - It would have been easy to miss this result, but Moritz ran in the small school race (a bit of a puzzler there, but that is where he turned up) and finished seventh with a time of 16:24. Moritz, as you recall, just got through winning the middle school state meet (3500m) and the USATF-Colorado 13-14 championship (4000m). Evidently, his range extends nicely to 5000 meters as well. All this begs the question of which high school Moritz will show up at next fall. Fossil Ridge? Fort Collins? Something in Loveland?

Camden Gillis - Gillis spent the fall playing soccer and riding on the mountain bike circuit. Evidently, that worked out pretty well for cross country training, too. Gillis joined his Salida classmates for a circuit on the Grande Sports World course and dropped a 16:10 on the field for third place in the small school race. Gillis did run track for Salida in the spring, but his fall might be a wee bit too busy for him to find time for cross country on a regular basis. Still...

Cruz Culpepper - Culpepper (and, yes, you do recognize that surname) did show up in a Niwot uniform this fall, but we relegated to sub-varsity status during the CHSAA-sanctioned season. He ran very well in a sub-varsity role and validated an entire season of performances in that role with 16:41 for 20th place in the medium school race. That marked him first among the Niwot finishers, a result which could portend bigger things in the spring and into next fall.